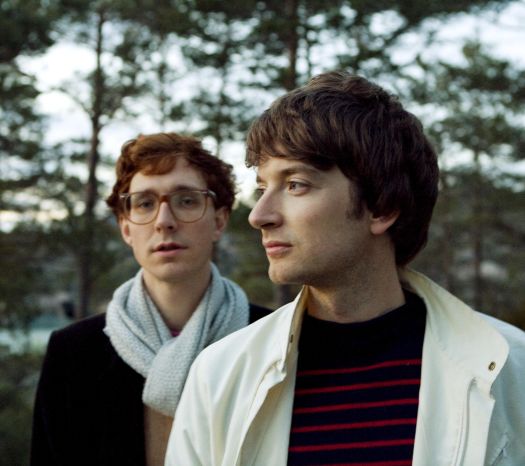 Yes, the Kings of Convenience. They of the cool name. This duo were indie folk before it was a thing.

Although Erlend Øye and Eirik Glambek Bøe formed the group as a duo in 1999 in Bergen, Norway, the two had known each since grade school and had performed in a group together as early an age as 16. I feel like I didn’t come across these guys right away but probably in 2002 or 2003, a year or two after their debut album’s release, and likely became familiar with them given the hype bestowed upon “Versus”, a remix album of their debut.

Speaking of their debut album, the title really says it all: “Quiet is the new loud”. Those older amongst you reading this might listen to their music and immediately identify Simon & Garfunkel as the most obvious influence. And you wouldn’t be wrong but their also drew inspiration from contemporaries Elliott Smith and Belle & Sebastian. “Winning a battle, losing the war”, the first track on the debut, is representative of its entirety. It is mainly gentle finger plucking on the acoustic guitars and lilting vocal harmonies, Any other instrumentation is almost incidental. It is as lovely, quiet, and calm as a Sunday morning at the cottage and listening to their music makes you yearn to be there.

Oh, what I’d give… I think to myself as I board the bus to work. Thankfully, it’s Friday.

1991’s “Loveless” is largely considered to My Bloody Valentine’s masterpiece. The band’s second album was recorded over a two to three year period, going through numerous studios and even more sound engineers, and causing a rift between the band and Creation label owner Alan McGee (who claimed the album nearly bankrupted him) in the process. Kevin Shields was either insane or a genius, depending on who you ask. He was obviously on to something in his mad scientist laboratory, concocting new and inventive ways of recording and making noise with his guitars. Despite not selling as well as expected, the album was lauded by critics, baffled the band’s peers at the time, and inspired generations of musicians.

You would think given the album’s legendary and god-like status in the shoegaze pantheon that yours truly would have loved it from the start. But not so. I tried and failed many times throughout the nineties to find value in the noise because I knew (I KNEW) it was in there somewhere. I think it finally took seeing a VHS on the shelf at my friend Alex’s apartment, live performances by the band (that also included Jesus and Mary Chain and maybe Blur?), and asking to put it on while we sat around drinking. My friend shrugged, it was his roommate’s tape and a little out of his jazz oeuvre. I remember that we were all pretty jarred by it, as out of our heads as we were by that point in the evening, and also quite jazzed (pun intended her).

“Only shallow” is the opening track and is a nuke to the head. The crunchiest guitars ever charge in and out during its duration, threatening to blow out any speakers not set at a minimum. The drum beat is merely a metronome that keeps vocalist Blinda Butcher on track. Her voice is breathy and sounding like it’s been run through a million effects pedals and distortion, and her words unintelligible, not that they really matter here. The guitars and the utterly destructive noise they create is the raison d’être.

And yes, it’s a great tune. It took almost a decade to realize it and to dig through the viscous noise haze, but that made finding the beauty and order in the chaos that much more satisfying.

(I got the idea for this new series while sifting through the ‘piles’ of digital photos on my laptop*. It occurred to me to share some of these great pics from some of my favourite concert sets from time to time. Like my ‘Vinyl love’ series, these posts will be more photos than words but that doesn’t mean I won’t welcome your thoughts and comments. And of course, until I get around to the next one, I invite you to peruse my ever-growing list of concerts of page.)

Artist: Of Monsters and Men
When: August 3rd, 2012
Where: Green stage, Osheaga Music and Arts Festival, Montreal
Context: When festival organizers scheduled Of Monsters and Men for the relatively small Green stage in the middle of the afternoon, they hadn’t really broken yet. By the time the festival rolled around, though, “Little talks” was pretty huge and the Icelandic indie folk collective drew a massive crowd, probably bigger than should have fit in that space. I had already been at that stage for a couple of sets and so had a pretty prime spot right near the front. The band was still pretty green and they were still finding their stage feet but the energy from the both the crowd and band was just awesome.
Point of reference song: “Little talks”

*I started taking tons of photos at concerts in the days of my old blog, Music Insanity. I actually took down that blog in part because I was spending far too much time at shows taking pictures and jotting down notes for reviews and I wasn’t enjoying the music experience enough. Nowadays, I try to take to some good shots during the first few minutes and for the most part, put my camera and phone away for the rest of the set.