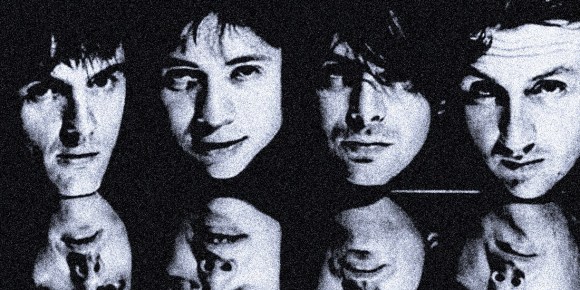 There are multiple stories and legends behind the coining of the term “shoegaze” and they are all generally variations on a theme. The word is that while reviewing a show he or she had witnessed, a certain music writer was referring to the fact that the singer was reading lyrics taped to the stage or that the lead guitarist was desperately trying to keep track of all his pedals. By some accounts, that show was an early one by the band Moose, the singer in question was Russell Yates, and the guitarist was K.J. ‘Moose’ McKillop, whose nickname gave the band their name.

Interesting, then, that Moose would actually dispense with the noisy and hazy sound that many would come identify with the shoegaze genre shortly after the recording of their first two EPs. This is likely why the group is almost never mentioned in connection with the term, especially one so often bandied about these days, and instead, we hear about Ride, Slowdive, My Bloody Valentine, and Lush. But another reason is that they are quite unfortunately forgotten, mostly because they were largely ignored by the buying public during their short existence. And yet somehow they managed to release three full-length albums after those first two initial EPs and some pretty catchy, rocking tunes.

How did I ever manage to hear the jingle jangle of “Little bird (are you happy in your cage)”? Two words. Mixed tape.

Mixed tapes were magical ways to discover and share new music in the age before the internet. A friend I made in the early days of university, perhaps a few years after this song’s release, recorded me a copy of Weezer’s self-titled debut album and filled side two of the tape with a bunch of other random songs to which she was listening at the time. Moose’s “Little bird” was just one of the great tunes she put together on the side that I ended up listening to way more than I did the Weezer album that I requested. It is a boppy jangly tune that captured me immediately in its rays of sun, the guitars and synths lilting all over the place like thrown petals of a flower, while the drums bounced along with the words, lyrics sung like a Psychedelic Furs song, but without any hint of cynicism.

It’s a great tune by a band by whom I would never hear another song for years but one that I would pay forward by including on many a mixed tape that I created for other friends.