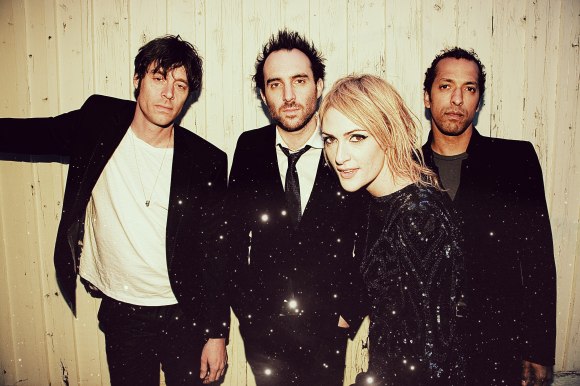 So I’ve mentioned once before in the last month or so that this blog is quickly approaching its fourth anniversary*, and looking back over my posts, I’ve noticed, much to my own surprise, that with the exception of one of my Vinyl Love posts, Canadian indie rockers Metric have yet to have been the focus of a post on any of my lists.

Metric got its start as the duo of James Shaw and Emily Haines back in 1998 in Toronto. Drummer Joules Scott-Key joined on in 2000 and a couple of years later, bassist Joshua Winstead made the group the quartet that we now know and love. As I wrote in that aforementioned Vinyl Love post, I was aware of the group from their early days because of my friend Jez. He saw them a number of times at various intimate clubs when they came to Ottawa in support of their debut album, “Old world underground, where are you?”. After his first time seeing them, Jez tried dragging me along with him and though I was sold on the music of the album he loaned me, I never seemed to have the money to spare.

By the time I finally did see Metric live, it was a number of years and three albums later and their latest, 2009’s “Fantasies”, had garnered them enough success to earn them a spot on Ottawa Bluesfest’s main stage, albeit one at a time slot in the early evening. My wife Victoria was quite a fan of that album and so I was able to convince her to join me on the lawn of the Canadian War Museum (where the festival has been annually held up to last year’s rude COVID-19 interruption) on a warm summer evening in July. Metric’s energy was fun and we both enjoyed singing along with all of our favourites, though Victoria later pointed out that Haines’s dancing was sometimes awkward and her vocals not as strong live as they were on the recordings. My opinion slightly differed than my wife’s – I thoroughly enjoyed finally catching their live experience. I’ve since seen Metric twice more, both times at different festivals, including once in support of their next album, “Synthetica”, from which comes today’s song of focus.

If “Fantasies” broke Metric more into the Canadian mainstream, “Synthetica” finished the job, songs like second single, “Breathing underwater”, gilding the festival stages for the appearances. The intro of synths is like a laser show starting, the whir of exciting machinery, then comes Shaw’s stadium ready, dancing guitar line and the driving drums, regularly punctuated with exciting fills at perfectly opportune moments and Emily Haines can hardly believe that it’s her up on the stage, singing “Is this my life?”. Indeed, the song seems to be a meditation on their good fortunes and success, the achieving of the impossible, and the worry that they are not at all up to the challenge of supporting the weight of being adored by fans around the world. Meanwhile, the video is a collage of clips of their charged live performances and the masses of audiences, including footage from a performance at Lollapalooza the previous year.

Apart from all that, “Breathing underwater” is an incredible and uplifting synth tinged rocker that will have you dancing and singing along every time.