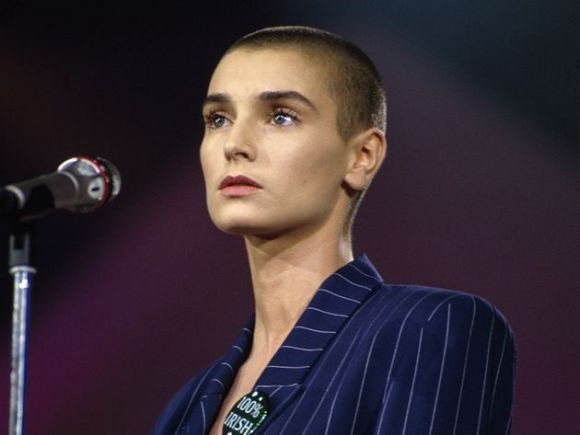 Our second stop on my favourite tunes of 1990 series is a cover, and oh, what a cover. Of course, at the time, I had no idea that Sinéad O’Connor’s massive hit single was originally written by Prince and recorded by The Family, one of his side projects.

I’ll never forget the first time that I saw the now iconic video on the CHUM FM 30 music video countdown. It focused almost solely in closeup of the beautiful vocalist’s face, catching every nuance of emotion in her grey-blue eyes, even the most subtle, those not already felt in her vocals, and in the few moments when the camera panned away, she was caught walking alone in a park in France, her shaved head ducking beneath the collar of a large and shapeless overcoat. And that voice, it was unparalleled at the time, and though since then, there have been many who have been influenced by her and have sung in a similar style, none have ever sounded quite like Sinéad O’Connor.

The Irish born singer got her start as a solo artist in the late eighties, releasing her debut album, “The lion and the cobra”, to almost universal acclaim in 1987. Still, the ridiculous commercial success came three years later in 1990 when she unveiled, “I do not want what I haven’t got”, featuring the now classic “I am stretched on your grave”, “Emperor’s new clothes”, ‘Three babies”, and this track. O’Connor has since recorded and released eight more albums, including 2014’s “I’m not bossy, I’m the boss”, but none of those have ever reached the same levels of success as her first two albums. I don’t think that these were beginner’s luck per se or that she lost her edge at all, but it’s quite possible that her outspoken nature and her controversial, extra-musical activities might have turned off her mainstream audiences.

But still we have this song, “Nothing compares 2 U”. To this day, I can’t say that I’ve ever heard The Family’s original recording of the tune but I have heard a live version that Prince later performed (after Sinéad’s recording) in duet with Rosie Gaines and I have to say that the cover is better. Both versions deal with loss but O’Connor is able to drum up more emotion, both raging anger and intense sadness, in her reflections on losing her mother to an automobile accident than Prince is able to ruminating on a broken down relationship. The instrumentation on O’Connor’s cover isn’t all that intricate, being only layers of plaintive strings over a simple but insistent beat. Truly, it all comes down to that power in her voice and it could move mountains.

Well said about the power of the video – and her voice!

Thanks dude. This really is one of those all time great covers.