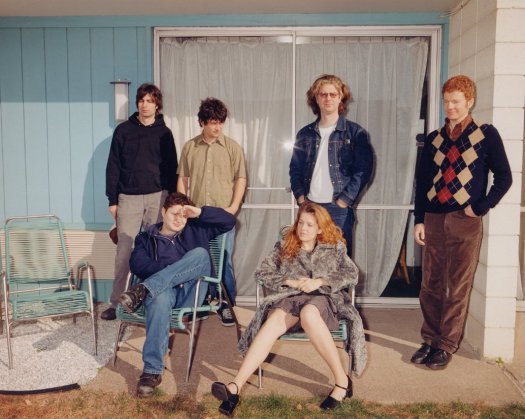 Track fourteen, the next stop on this short list of great songs from the year 2000 takes us to a hopping ditty off “Mass romantic”, the debut album by The New Pornographers.

But before I go there, I need to talk a little bit about “Fubar”, a Canadian indie film released in 2002 that has since amassed quite the cult following. It is the debut film by Canadian director Michael Dowse and was shot in mockumentary style on digital camera and a tiny budget. The film focuses on two lifelong friends, Terry and Dean, metal heads, beer drinkers, and basically, hosers (for want of a better word). “Fubar” is as hilarious as it is sad and if it didn’t popularize the term “Giv’r”, it certainly didn’t hurt its proliferation in popular culture usage.

But why did I have to mention this film in relation to The New Pornographers’ “The slow descent into alcoholism”? First, because it’s a great Canadian film that could use another plug and reminder. Second, because its soundtrack boasted a playlist of classic Canadian rock tracks as covered by contemporary Canadian artists, including The New Pornographers’ rendition of “Your daddy don’t know” by Toronto. And finally, because Terry and Deaner appear in the video that Michael Dowse made for “The slow descent into alcoholism” (see below), doing what they do best: drinking beer and being hosers.

The New Pornographers formed in Vancouver in 1997 under the leadership of Carl Newman. It’s sometimes easy to forget that the band is really a collective and supergroup, and these days, even after seven albums together, all of its members (there are 8 of them!) still have other established projects on the go, some of them as well-known and successful as this one. What is so unique and incredible about The New Pornos is that they have lasted so long and that their sound is so cohesive, despite the different styles of its vocalists and principle songwriters: the aforementioned Newman, Dan Bejar, Neko Case, and Kathryn Calder (who didn’t join until 2005).

In trying to explain “Mass romantic”‘s immediate appeal and hook, critics have been quick to assign different iconic artists as comparison points to each song on the album. Apparently, “The slow descent into alcoholism” is David Bowie. And I suppose I can see a bit of glam rock and a touch of the theatrical in the verses and the way Newman delivers them. It’s a staccato rhythm driving the keys and vocals, all matched up with the ragtime drum beat. However, once Neko Case lovingly layers her soft and punchy backing vocals to Newman’s, all bets are off. Personally, I’ve never seen this band as derivative of any other sound and don’t really see eye-to-eye with those who take the lazy way out and shove them into the power pop pigeonhole. It’s a pop song, sure, and mighty powerful, but this group is one of a kind.

9 Replies to “Best tunes of 2000: #14 The New Pornographers “The slow descent into alcoholism””