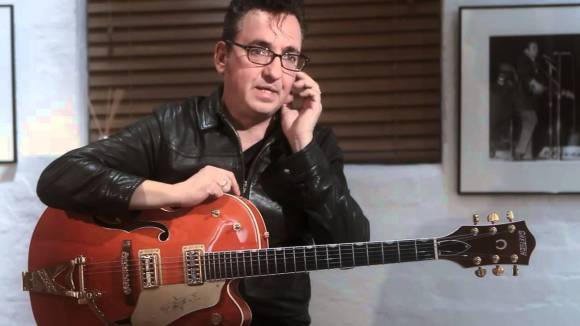 You may not be familiar with the name Richard Hawley, nor his music, but you might have heard of the short-lived 90s post-Britpop band, Longpigs. And if not them, surely Pulp. Hawley was a guitarist for both of these bands, lead for the former, touring and session performer for the latter. And though I can’t remember exactly when I decided to sample some of his solo material, it was definitely because of his work with those two bands (both of whom, I love) that I did so. However, all you have to do is listen to the first two seconds of the song below to determine that his solo work sounds nothing like the music by his former bands.

At first, I enjoyed quite a bit of his debut long player, “Late night final”, whenever I listened to it, especially “Long black train”. However, after a month or so of spins, I forgot all about the album until around 2008 when I recognized his song “Baby, you’re my light” in the film, “Nick and Norah’s infinite playlist”. (It’s a great film, if you haven’t seen it, though I’m a sucker for any film about music.) Then, I went on a huge Richard Hawley kick, rediscovering the debut and exploring the rest of his output up to that point.

My wife Victoria was not a huge fan of “Long black train” when I played it for her, saying it sounds too much like a Christmas song. She’s not exactly wrong in this. What she knows as the Christmas classics were usually sung by the crooners of the thirties, forties, and fifties. And Richard Hawley certainly sings like a crooner, channelling Bing Crosby and Frank Sinatra. Indeed, his smooth baritone vocals negate any need at all for complex instrumentation.

For me, “Long black train” is slow burning number, like a cigarette left unattended in an overflowing ashtray, nearly since the point of lighting, the length of it ash, threatening to disintegrate to nothing with one misdirected deep breath. It is a gentle tug at the acoustic, a hint of the slide, the pretence of the xylophone, and Hawley’s deep voice rumbling over it all. It is the time of night of the album’s title, when any respectable person is already asleep and misery reigns.

It’s not at all a song for your morning commute. If I were you, I’d wait until the sun goes down later on today and then, turn it up.

A great choice, JP. I’ve always liked Hawley’s solo stuff more than Longpigs and Pulp. He has that special something about him.

It’s gotta be the voice. It’s unmistakable whenever, wherever you hear him. Smooth and deep, like a great malt whiskey.

The sun should be on its way down within the hour, optimal listening conditions should be arriving soon!

Yes. It’s getting near about time now…