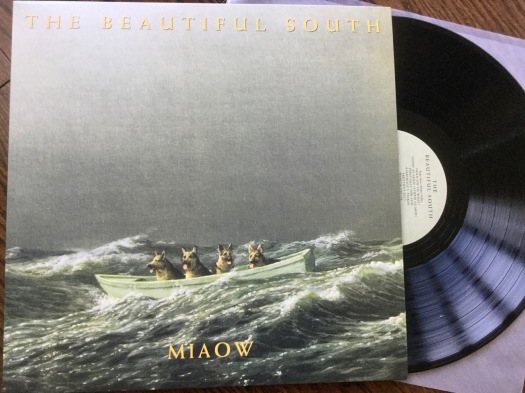 The skinny: So this here’s the third and final (for now) installment in a totally unplanned series on the reissued Beautiful South albums in my vinyl collection. “Miaow” is the English alternative pop band’s fourth album and in my opinion, was their last great record. Much like on “Welcome to The Beautiful South“, the subject of the first of this series two weeks ago, the cover on this reissue is much different than the one I purchased on CD, many moons ago. But the reason for this was a controversy of a different sort. The owners of music chain HMV thought that the original cover of an audience of dogs expectantly looking up at a gramophone on a stage poked fun at their trademark. I’d never seen this replacement cover featuring sailing dogs until I received this reissue in the post. I’m still hoping that the band’s sophomore album, “Choke”, gets a reissue so that I can complete my collection of their must-have first four records. And well, I find myself wondering what that album cover will look like.

One Reply to “Vinyl love: The Beautiful South “Miaow””