Artist: The Cranberries
Album Title: Everybody else is doing it, so why can’t we?
Year released: 1993
Year reissued: 2018
Details: standard black, 25th anniversary, 180 gram, remastered at Abbey Road studios 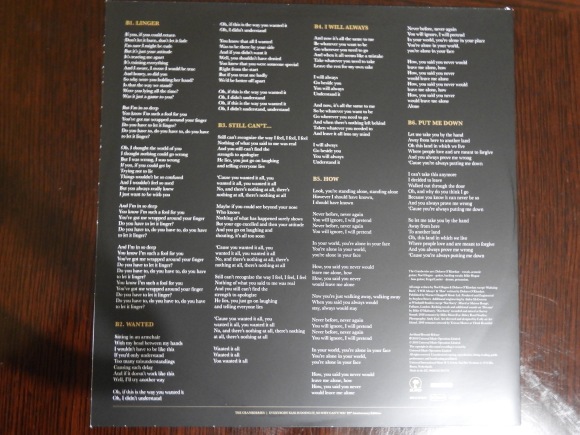 The skinny: Living in North America, my first exposure to the jangle rock of The Cranberries and the incredible vocals of frontwoman Dolores O’Riordan was the single “Linger”. MTV picked the video up, MuchMusic soon followed suit, and then, it was everywhere. This was just the beginning, of course, because the band would explode and achieve outright superstar status the following year with “Zombie”. But we’re talking about the debut right now and this here is its 25th anniversary. Before Dolores tragically died earlier this year, plans were already underway to remaster this album at Abbey Road Studios in celebration and as you can see above, it also became a way to remember her glorious voice.

4 replies on “Vinyl love: The Cranberries “Everybody else is doing it, so why can’t we?””

I never really caught onto The Cranberries at the time – I was all about ‘grunge’, American alternative rock, and Radiohead. However, I did like the singles I’d heard. Catchy. Well written… and she had a great voice. Distinctive. Exceptional. I still haven’t heard any studio albums!

To be honest, I was more about “No need to argue” as a complete album at the time but this was has grown on me as a whole over time. I’m thinking the other one is going to get the 25th anniversary reissue treatment next year. You can bet I’ll get that one too.

I’m with J, always liked the singles & the voice, but have yet to hear the albums!

[…] Records that by all accounts, is subpar at best. Then, The Cranberries’ debut album, “Everybody else is doing it, so why can’t we?“, was reissued in 2018 for its 25th anniversary (which I bought) and so I figured if I could […]