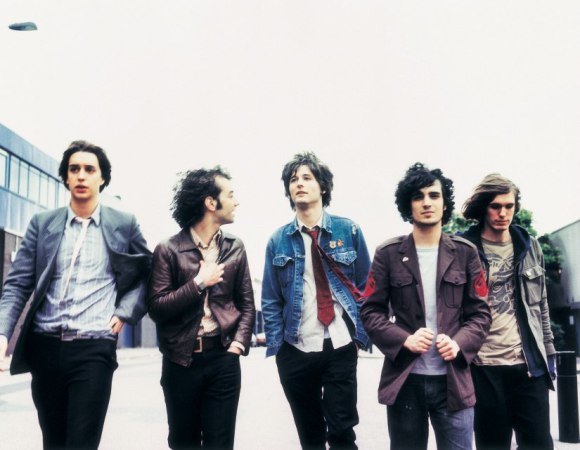 At number five on this Best tunes of 2001 list is the second single off The Strokes’ debut album “Is this it?”. Arguably, this song, the band, and this album were instrumental in plotting the ultimate direction of indie and alternative rock for the new millennium.

The Strokes formed in New York City in 1998. The five piece led by frontman Julian Casablancas recorded a raw and energetic EP in 2001 that started a bidding war amongst the majors. They ended up landing with RCA, who released the debut LP referred to above, a ten song juggernaut that was recorded with the same producer and same DIY ethos as the EP. To say that “Is this it?” generated a buzz is putting it mildly. There was unanimous acclaim. It appeared on everyone’s best of the year list and the band’s name was on everyone’s lips.

I remember them still being a hot item even a year later. It sticks out to me because I made a special trip to Peterborough in 2002 to visit my friends from university. On the morning-slash-early-afternoon after I arrived, the load of us walked down to The Only Cafe for brunch. This meal was particularly memorable, first of all, because it was a unique experience, given the socialist, trust-based business plan of the establishment and its mixed bag clientele, and second, due to “Is this it?” being played whilst we chewed on egg, toast, and crunchy coffee. Pretty much all of my friends recognized the album, despite the varied tastes, liked it and were effusive in their praise of the sound and the excitement with which it polluted the air all around.

“Last nite” is representative of the raw, driven energy, and the immediacy of the album. The production is purposefully not crisp, giving the impression (which is actually correct) that it was recorded live in one take, a loud broadcast from a shambolic garage. Indeed, it succeeds in presenting the band as from another age, finding itself lost in the present day, a time traveller from the past informing the present of its mistakes. Casablancas is a lounge singing Lou Reed, half-heartedly trying to keep up with the song’s pace, and the band is keeping it simple, like pop music, if said pop music were roughly hewn from a rusty old carving knife.

Brilliant, tune… and I’ll be honest, I was a naysayer when my brother blabbered on about these guys. I thought “ach… away”. Turns out he was right… only took me 10 years to latch onto them and declare them, this tune, and the album as wonderful.

I was on it almost from the beginning but honestly, I don’t know if I’ve heard anything else by them.

I’ve delved into the two after this. Room on Fire is pretty good, but First Impressions… is pretty mnah.

Exciting to Mnah in just two albums. Such a shame.

I guess they were that kind of band, huh?

the layered intro’s a good one!

[…] of the revival were New York, whose scene was led by Interpol and The Strokes (appearing at #5 on this list), and Detroit, from which came The Detroit Cobras and The White […]

[…] a post on the number five song on my Best tunes of 2001 list, The Strokes’ “Last nite”, I wrote about how that band was at the vanguard of an indie rock revival. Then, two songs later […]