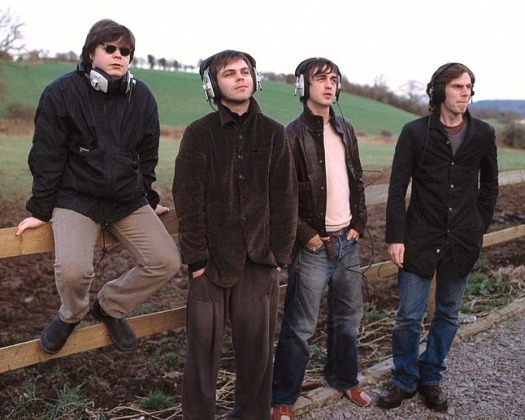 If you haven’t already, you likely will see over time (if you continue to peruse these pages), that my musical tastes in the 1990s tended towards artists that hailed from England, Scotland, Ireland, and Wales. So when the so-called Britpop (or Cool Britannia) scene exploded in the middle of that decade, I was all over it. Bands that I had already been listening to were all of a sudden getting more exposure and new ones were popping up at an incredible rate. Some of the bands that came out of the woodwork during this time were amazing… but frankly, some didn’t deserve the attention they received. I didn’t get into Supergrass when I first heard them circa 1995 just for this reason. Although I loved the hit single, “Alright”, I feared this zany trio might end up being one of these latter bands.

Supergrass had formed a couple of years earlier, in 1993, by frontman/guitarist Gaz Coombes, bassist Mick Quinn, and drummer Danny Goffey. They were seen as the jokesters of scene because of the humour they injected into their rapid fire and three-minute pop songs. Case in point was their debut single, “Caught by the fuzz”, a narrative regaling Coombes’ experience of getting stopped while in possession of marijuana. I even remember reading an article at the time about how they were in talks to produce a sort of “Monkees” style, outlandish television show, though I don’t remember now why it didn’t come together.

I finally gave Supergrass a chance in 1999 when they released their third album, the self-titled one, and I kicked myself then for waiting so long. By the time 2002 rolled around, I was a pretty big fan of each of the first three albums and I was seriously looking forward to album number four. I bought “Life on other planets” on compact disc from the HMV store at the Rideau Centre with a gift card I had won from work. It was the first album that listed Gaz’s brother Rob as an official member of the band, his keys giving it a fuller sound, and it was an attempt by the band to recapture the energy of their first two albums. The tracks all clock in around the two and three minute mark, the only real exceptions being the final track, “Run”, and track six, “Evening of the day” and these are both due to their extended outros.

The latter track just mentioned was never released as a single and yet still managed to win me over as my favourite on the album and one of my tops of 2002. It’s got a killer groove, snappy snare brushing and cymbal splashing, and peppy guitar rhythms. It also features bassist Quinn with a deep set of vocals and Coombes taking a back seat for the singalong. Then, at the chorus that gives a knowing tip to Spinal Tap, things pick up for some more rock and roll. I often found myself hitting replay on the CD before I ever got to the end of the outro and now do so on my iPod. So good.