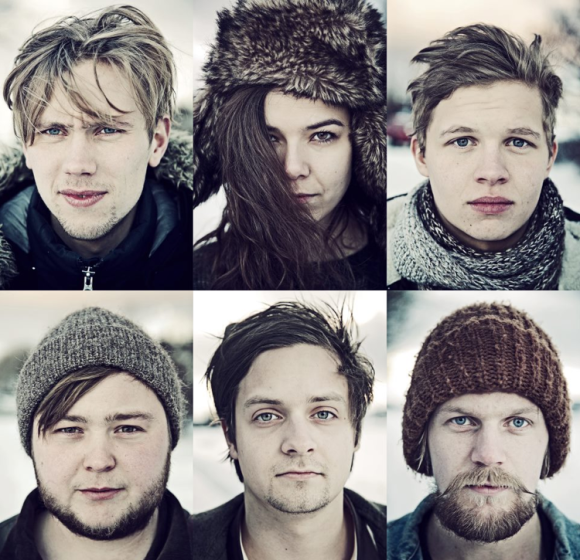 What is it with Iceland, this tiny island country with a population hovering between 300,000 and 400,000, that keeps producing not just talented, but groundbreaking musicians? Is it something in the volcanic ash or all those dang waterfalls? First, it was The Sugarcubes and Björk in the late 80s, followed by Múm and Sigur Rós in the late 90s, and then, in 2012, Of Monsters And Men were suddenly the darlings of the indie rock world.

The group formed in 2010 when singer/songwriter, Nanna Bryndís Hilmarsdóttir decided to flesh out her sound with a full band and flesh it out she did. By the time they were signed to Record Records in 2011, they were up to six members and typically added a couple more on stage for good measure when performing live. Their debut album, “My head is an animal”, was actually released in 2011 in their home country but it wasn’t long before they were generating buzz outside the small island’s borders, mostly on the back of the song that is the reason for today’s post. I’ve included “Little talks” as my number one favourite song of 2012 (despite being released the year before) because this is the year it was officially released in North America and just a few months earlier was when I came across them and quickly fell for them.

I actually have work colleague, Jean-Pierre, to thank for turning me on to Of Monsters And Men*. He mentioned their band name one day as we passed each other in the office hallway, as we were wont to do, back when we were actually working in the office. Indeed, we often shared the names of bands and especially, the names of songs to which we were currently listening and typically, name dropped other band names as points of reference. In this case, The Decemberists and Edward Sharpe and the Magnetic Zeros set off alarm bells in my head so I made a mental note and set about investigating later that night.

As I already hinted above, “Little talks” generated tons of buzz with the indie hipsters, on the net, in blogs everywhere, and on college radio. And with very good reason. “Little talks” is one of the catchiest pieces of pop gemstones that you might ever hear. It definitely benefitted from the surge of interest at the time in indie-folk music, mostly generated by bands like The Decemberists, The Lumineers, and Mumford And Sons. “Little talks” shared some of the qualities of these types of acts (“Hey!”) but the female/male vocal interplay also had me drawing comparisons to The Beautiful South and the varied instruments and big sound was reminiscent of Arcade Fire.

*Although, given how big they became, I’m pretty certain I may have noticed them eventually.

Big fan of this album and song. Always enjoy your posts!

Me too. One of those albums I can listen to all the time. Thanks for the kind words.