In 2013, Duluth, Minnesota-based indie rock act, Low, celebrated their twentieth anniversary as a group by releasing their 10th studio album, “The invisible way”. The trio of Alan Sparhawk (guitars/vocals), Mimi Parker (drums/vocals), and Steve Garrington (bass) enlisted the production help of Wilco’s Jeff Tweedy for this outing. Apparently, though, the album didn’t stray too far from the group’s normal template of gentle, minimalist, beautiful tones. I say “apparently” because this is the album for which I first took notice of the group and embraced them. I gave “The invisible way” a thorough run through, ensuring they were thus on my radar for future releases but not going so far as to travel too far down their back catalogue road.

According to Sparhawk, the creative leader of the group, the only glaring differences between this album and the ones that came before was the addition of a lot more piano work and the fact that his partner in crime, Mimi Parker, shifts from her usual support role to take over lead vocals on five of the album’s tracks. Today’s tune, “Just make it stop”, is an example of one of these tracks.

The second tune to be teased in advance of the album’s release is mostly driven by Parker’s delicate voice and her just as gentle brushing on the drums but about halfway through, we do get the addition of those aforementioned keys and a bit of bass muscle. Indeed, the song almost creeps into upbeat territory. But let’s stress the word “almost” here. Let’s not get too crazy because this is Low we are talking about, the band that quite possible inspired the term ‘slowcore’. I won’t belabour this, though. Just press play on the video below and let Parker haunt you too. 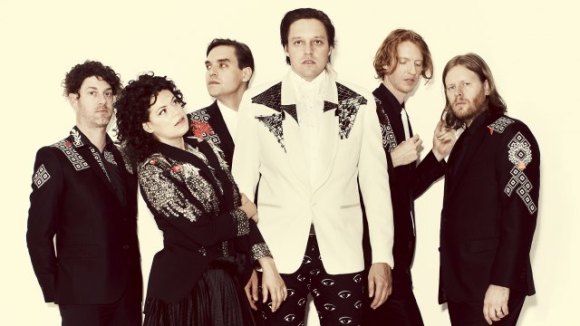 For all those fellow Canadians out there, I want to wish each and everyone of you a real “Happy Canada day”!

And I mean that truly.

It’s been a tough two-plus years. Not just here, but everywhere, I know, and though Canada day has always been a big celebration here, whether or not we deserve it, this year, I think, we do. My own celebration will involve spending time with the one person in the world that means the most to me but I’d also like to observe it here, in a tiny way, on these pages. And what better way than to start up a new list and to kick it off with a great tune by a great Canadian band.

By 2013, the indie rock collective from Montreal (known as Arcade Fire) had already released three groundbreaking albums, the last actually landing the band a surprise turn at the top of the Grammy podium for best album for 2010’s “The suburbs”, and now, they were due for something new. The question was, what would it sound like and could it possibly top what we’d already heard from a band that everyone seemed to be looking to for innovation.

We finally started to get hints of what might be coming in the summer of 2013, as cryptic street art incorporating the title of the forthcoming album started to appear around the world. The campaign was admittedly a bit much but it was effective and though the band’s wishes that attendees at their ensuing tour stops dress up in costume was widely criticized, you can’t fault the band for trying to rouse their fans from complacency. Arcade Fire has always been earnest and this was possibly their pinnacle, if not their most successful endeavour.

“Reflektor” saw contributions from LCD Soundsystem’s James Murphy, as well Mr. David Bowie, and for all its expectations, it didn’t really suffer too badly at the hands of the critics. It saw the release of five singles, each of them big and epic and completely Arcade Fire (if you can excuse me using their name as an adjective), but for me the best track on an album that was great, yet still seemed to pale in the shadow of the previous three, was the disco and rara-inspired “Here comes the night time”.

This track actually appears as two different versions, each on a separate disc of the double album, but I am definitely more for the first part, which was apparently written and recorded second. It truly encapsulates what the band were aiming for when they were looking to make music that multi-instrumentalist Regjne Chassagne would dance to. Like the rest of the album, the sound was hugely influenced by the band’s visit to Haiti, the country from which her parents originally emigrated to Canada. Indeed, this track in particular was written about that country’s capital city, Port-au-Prince, a dangerous city at the best of times but one that becomes lethal at night due to the lack of electricity and the relative safety of unnatural lighting.

“When the sun goes down, you head inside
‘Cause the lights don’t work
Yeah, nothing works, they say you don’t mind”

Six minutes of Caribbean sounds funnelled through machines and synthesizers and other computer gadgetry. It wavers and warbles between frenetic beats and gliding vibes. It marches and dances and cavorts, with feathers and masks and streamers, shades of carnival lights and energy, while its ringmasters, Win and Regine, conduct you safely through the streets of the Haitian capital on an epic journey to bliss and magic.

So go on out and celebrate!

What is it with Iceland, this tiny island country with a population hovering between 300,000 and 400,000, that keeps producing not just talented, but groundbreaking musicians? Is it something in the volcanic ash or all those dang waterfalls? First, it was The Sugarcubes and Björk in the late 80s, followed by Múm and Sigur Rós in the late 90s, and then, in 2012, Of Monsters And Men were suddenly the darlings of the indie rock world.

The group formed in 2010 when singer/songwriter, Nanna Bryndís Hilmarsdóttir decided to flesh out her sound with a full band and flesh it out she did. By the time they were signed to Record Records in 2011, they were up to six members and typically added a couple more on stage for good measure when performing live. Their debut album, “My head is an animal”, was actually released in 2011 in their home country but it wasn’t long before they were generating buzz outside the small island’s borders, mostly on the back of the song that is the reason for today’s post. I’ve included “Little talks” as my number one favourite song of 2012 (despite being released the year before) because this is the year it was officially released in North America and just a few months earlier was when I came across them and quickly fell for them.

I actually have work colleague, Jean-Pierre, to thank for turning me on to Of Monsters And Men*. He mentioned their band name one day as we passed each other in the office hallway, as we were wont to do, back when we were actually working in the office. Indeed, we often shared the names of bands and especially, the names of songs to which we were currently listening and typically, name dropped other band names as points of reference. In this case, The Decemberists and Edward Sharpe and the Magnetic Zeros set off alarm bells in my head so I made a mental note and set about investigating later that night.

As I already hinted above, “Little talks” generated tons of buzz with the indie hipsters, on the net, in blogs everywhere, and on college radio. And with very good reason. “Little talks” is one of the catchiest pieces of pop gemstones that you might ever hear. It definitely benefitted from the surge of interest at the time in indie-folk music, mostly generated by bands like The Decemberists, The Lumineers, and Mumford And Sons. “Little talks” shared some of the qualities of these types of acts (“Hey!”) but the female/male vocal interplay also had me drawing comparisons to The Beautiful South and the varied instruments and big sound was reminiscent of Arcade Fire.

*Although, given how big they became, I’m pretty certain I may have noticed them eventually.