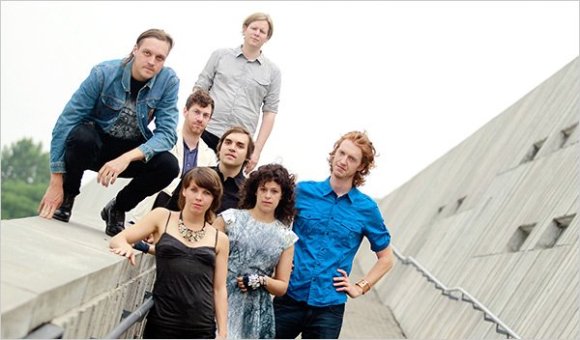 And here we are finally at the penultimate track on this best tunes of 2010 list and we have a second song from what many consider to be Arcade Fire’s masterpiece: “The suburbs” (the title track appeared at #12). For myself, I don’t know if I can decide between this one and their debut album, “Funeral”, it’s really too close to call. I liked both albums from the start, though they are quite distinctly different.

“The suburbs” is a bleak, post-apocalyptic rendering of suburbia, but it is done with love. In many cases, the songs are brighter and shinier than those on the darker “Funeral”. Indeed, “Sprawl II (Mountains beyond mountains)” is a perfect example of how Arcade Fire twists it’s subject matter into something more uplifting and almost joyous.

“They heard me singing and they told me to stop,
Quit these pretentious things and just punch the clock,
These days, my life, I feel it has no purpose.”

The sixth and final single released off the album features Win Butler’s partner in crime and in life, Régine Chassagne, on vocals and she is star of the music video as well. She leaves her suburban home with a pair of headphones on and she starts the music immediately. Then, we see suburban folk doing typically suburban things, like hanging out in lawn chairs and watering the lawn, except they’re all wearing masks, some of them faceless, and all the while, Régine just sings and dances away any fear and loathing she might have. It all culminates in a fearless night time dance party on a football field, where she leads the way with cheerleading streamers.

I’ve often felt that she was channeling Björk a bit here and not just in the video, where the humdrum world becomes a sort of Hollywood musical, albeit a twisted one, once the music starts. But in the song itself and how she sings the song, right down to the vocal mannerisms.

And it is on “Sprawl II” more than on any other song on “The suburbs” that we get a hint at the direction Arcade Fire would take on future albums. Music that Régine could dance to was how Win Butler explained the sound on “Reflektor”. Well, she’s dancing all over “Sprawl II“ and it’s super contagious.

This is another album that I might need to revisit. I remember at the time being left feeling quite cold by it and not really enjoying much of the songs. Not sure about this one, myself.

Yeah, I don’t know. For some reason, it reminded me of early solo Björk, which I loved. It’s fun.

I’ll give it another go… it’s been a while since I heard it.

Good album, but this song is the one I always look forward to when I play it.

And it’s right at the end. Like saving the best for last or something.

I don’t know what it is about this band, but I can’t seem to get into them.

You’re not the first to tell me this. I get that they’re not for everyone. And as much as I loved their first three, I’ve been underwhelmed for the last couple.

Have you done any more video logs by the way?

We did a live stream on Sunday with our friend Bill. Talked about music. The audio of it is supposed to be posted but not sure when that’s happening. No YouTube vlogs for a couple of weeks now.

That’s super cool. I can’t imagine ever doing a video log myself. Looks like fun but I’d get way too nervous and talk like Charlie Brown’s parents.

I am nervous talking on camera, but feel less so when talking about what I like.

She’s my favourite thing about Arcade Fire – so if making music she can dance to is the vision, that sounds like a good approach!

[…] followed: first, the title track was slotted in at number twelve and the standout song below came a very close second to the number one for that year. For me, “The suburbs” is one of the best, if not the […]