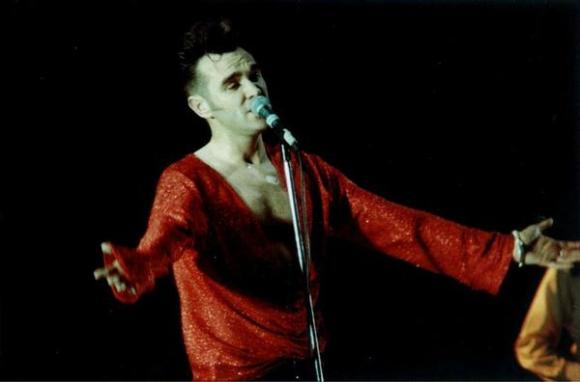 Pretty much whenever I hear Morrissey, I can’t help but think of my old friend John, whom I grew up alongside. I vaguely remember when his family moved into the neighbourhood, a handful of houses around the corner. We were both very young. We were in Boy Scouts together and though we went to different elementary schools and high schools, we hung out quite a bit after school and on weekends. Much later, when I was in university, he moved to Toronto too. We were housemates for a couple of years but grew apart after we all gave up the apartment and went in our separate directions. I haven’t spoken to him in a long time but will always remember that he introduced me to Morrissey. And looking back, it is obvious now that he emulated the Moz in many ways, was definitely as theatrical and put upon the image of tortured soul.

It was the “Kill uncle” CD that John first lent me, Morrissey’s second solo album. And though “Mute witness” was the first song on it that caught my ear, the song I would rewind over and over again on my cassette recorded copy of the album, “Sing your life” would grow on me to become my favourite on the album. It would also become my wife, Victoria’s gateway to Morrissey when I put it on one of the many mixed tapes I made for her in our early years together. And well, what a great tune it is, albeit slightly unrepresentative of Morrissey’s other work, given its upbeat nature. He appears to be instructing us on how to write songs, hinting that it isn’t all that hard.

“Any fool can think of words that rhyme. Many others do. Why don’t you?”

The funny thing is that I don’t think he ever used this template for his own songwriting. He definitely doesn’t just list the things he loves and loathes. Indeed, “Sing your life” might very well be his most straightforward written song, as if he was attempting a light pop song. But even here, he’s a little jaded.

“And make no mistake, my friend. Your pointless life will end.”

And oh yes, before I go, I’d be remiss and Andrew Rodriguez would have my head if I didn’t mention the rockabilly version Morrissey recorded after the fact with a different set of musicians than appeared on the album. Both are great in my opinion. Cheers.

Never really liked him or his music, though my brother and a few pals have tried over the years to convince me that the man’s a genius!

I liked his solo stuff well before I did The Smiths, though my friend John tried to get me on to them as well. Sometimes it doesn’t catch. I’m in a similar boat with Husker Du and Sonic Youth. I know they’re good but I just can’t see to… well, you know…

I know what you mean. Though I can’t even say that I know this guy is any good 😉

Of course I approve of Morrissey on such a list!
Kill Uncle isn’t his strongest, but Sing Your Life does make for a strong single

Haha. You seem to be one of the few that does approve. But I really like this single too.

Sorry I’m in the not-for-me category on this one. Smiths and Morrissey aren’t my bag. Good on ya though!