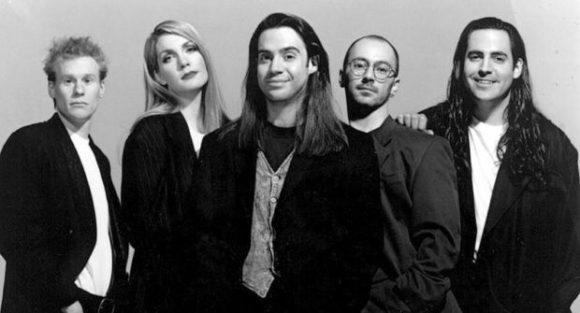 For some reason, I don’t remember the moment I discovered “Superman’s song”, though I definitely remember it being a big part of my musical experience back in 1991. It probably started with the music video that gained a lot of traction on MuchMusic and became impossible to avoid for a while, the funeral for the man of steel seeming utterly bleak and impressionable, given its low attendance and guests including almost unrecognizable and aged superheroes. I most certainly purchased the album, Crash Test Dummies’ debut, “The ghosts that haunt me”, on cassette tape on the back of this song and it accompanied me, care of my yellow Sony Sports Walkman on many walks and on the bus rides to and from high school. I have very vivid memories of trying to explain their sound to a girl in our high school library one afternoon during spare period. She had told me that she found the cover art, a turquoise rendering of a Doré print, interesting after noting it on the table I was sitting at, though I later discovered she had a crush on me and couldn’t have cared less about the band. I loved that tape to pieces and would have worn it out had it not been stolen first. It’s also one that I’d love to own on vinyl if it ever gets a reissue.

Crash Test Dummies were a folk rock band that formed in Winnipeg, Manitoba, Canada. I’m pretty sure I’ve read somewhere that the group got their start at an open mike night, varying musicians surrounding songwriter Brad Roberts that eventually solidified into a consistent group. Their original sound was lively folk, featuring traditional instruments, but as the albums started to churn out, became more electric and straightforward rock. What really set them apart, though, was the deep deep bass-baritone of Roberts, especially when blended with Ellen Reid’s angelic backing vocals. The dichotomy was jarring but beautiful.

“Superman’s song” was the group’s very first single and was huge in Canada. And I could be wrong but I thought I heard it said that it was one of the first songs Roberts had ever written. It certainly sounds like it could have been written by a child. There’s something very simple and innocent about it, though dark at the same time, taking for its theme the death of a superhero and imagining what sort of eulogy he would have gotten. It trudges along with the funeral procession, a piano keeping pace and a cello crying in the wings, while Robert’s voice rumbles deep to the bottom of all of our hearts. Yup.

I remember this song being huge, and really not liking it. I didn’t mind their other hits though (Mmm Mmm Mmm Mmm, was pretty good). They were just overplayed to the hilt.

Yeah. It’s that damned Can Con conundrum. Radio stations latched on to anything relatively commercially viable that was also Canadian to hit the quota of Canadian music played. It meant over saturation of a lot of this type thing. If you ever get the chance to pick up Ghosts that haunt me, do so. It’s really good.

I have a few Crash Test Dummies bits and pieces here, including the album this is from. I definitely need to pay more attention to it, though.

Although the Mmm Mnm Mmm Mmm tune was played quite a bit on radio in the UK, I think they were largely ignored.

Yeah. I really liked this debut album. It’s a lot more than just this one song. Some great folk rock. I’m not surprised that “Ghosts that haunt me” wasn’t big outside of Canada. If it weren’t for “Superman’s song”, it might not have been that big here either. A shame, really.

[…] the debut album by Winnipeg’s Crash Test Dummies, as part of my Best tunes of 1991 series (“Superman’s song” at #24). That darned cassette definitely got a workout in both my Walkman and my stereo while at […]

[…] of The Replacements’ “Androgynous” and their first huge and at the time ubiquitous hit, “Superman’s song”. It was in that latter post that I went on about how I bought the cassette tape on the back of […]