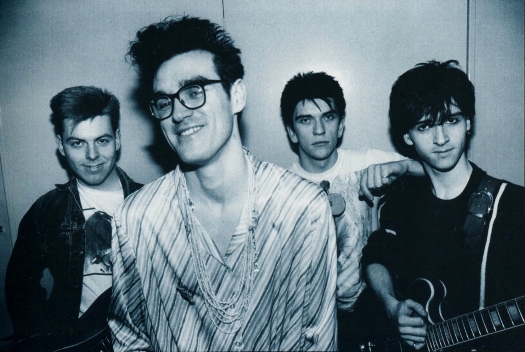 Context:
Andy Rourke, Mike Joyce, Johnny Marr, and Morrissey. The Smiths. They were the Manchester-based four-piece with which every British indie/alt-rock band that came after were compared. They only existed five years, from 1982 to 1987, but released four excellent albums in that time, along with a ton of singles and compilations. They were a resolute reaction to everything popular at the time, declining to use the synthesizers dominating the new wave and synth pop dance floors for their debut, and taking a stance against popular rock tropes. Marr refused to used power chords or embroider long solos into their songs, though he so obviously had the ability to do so. Morrissey was himself the antithesis to rock star as frontman, affecting an androgynous image, dressing plainly, and regularly wearing uncool glasses. And yet despite all this antagonism, Marr’s guitar playing and Morrissey’s songwriting and vocals are considered touchstones of the band and are often cited as influences by countless artists.

They split acrimoniously when Johnny Marr left the band in 1987 and I’m pretty sure Morrissey has never forgiven him. Shortly afterwards, Rourke and Joyce sued Marr and Morrissey when they learned that they weren’t receiving equal shares of the band royalties. Since their dissolution, all four members have gone on to do other work in the music industry. Of course, Morrissey’s solo career has been arguably the most successful, long and storied with at least one comeback album along the way. Johnny Marr for his part has collaborated with pretty much everyone, been a member of more than a few bands, and only in recent years, threw his own name into the ring to forge a solo career. And yet, almost since the moment they called it quits, the music world has been clamouring for their reunion. Money has been offered them, lucrative sums by all accounts, and still Marr and Morrissey have not given in. For years, they scoffed at the idea but they seemed to be warming to it this last decade. So we might see one yet.

I actually liked Morrissey’s solo material before I ever did The Smiths. But I blame my old friend John for that. He played them to death, especially when we were housemates in university. Whenever he was home, some Smiths album or other would be playing on repeat in his bedroom, whether he was in there or not. It took me years to get over this, only being able to stomach the handful of songs that I got into before living with John. I became a fan on my own, little by little, discovering the joys of each album, one at a time and all this culminating in the purchase of The Smiths box set for my vinyl collection a few years ago. This is now a jewel on my shelf, all four full-length albums, two compilations, and a live album, all of it on 180 gram vinyl.

But yeah. Top five tunes. This one here was probably the easiest to narrow down to five of any of the lists so far in this particular series. It’s not that the group didn’t have a lot of great tunes from which to choose but for me, these are the best because I have loved them the longest. I know this means little to any of you and it might even mean less to me in a decade or so but this is what we have right now.

Of course, I am curious as to all of your own relationships with The Smiths. Do you love them or hate them. What are your top five tunes?

Like a number of the songs on this list, “Panic” was released as a non-album single originally and later appeared on a bunch of their compilations, notably “Louder than bombs”. It apparently was written as a condemnation of the pop music that was rampant at the time, while there was “panic on the streets” and the world was falling apart all around. The calls to “burn down the disco” and “hang the DJ” were somewhat provocative and were met in some quarters with criticism. But to my mind, they were just fun to shout along with while I danced at my university pub, almost a decade after its release. At just a smidge over two minutes, it’s a swift kick to the teeth. A stomping beat and an encouraging guitar riff, encouraging to tear it all down and sing along with Morrissey and his choir of kids: “hang the DJ, hang the DJ, hang the DJ…”

This one here’s the only one this list that originally appeared on an album (their final one) and wasn’t released as a single, though it certainly sounds like it could’ve been. I first heard it when a friend in university put it on a retro 80s mixed tape for me. I thought hilarious from the first line and the laughter only increased as the verse moved itself along. “I’ve come to wish you an unhappy birthday, ’cause you’re evil, and you lie, and if you should die, I may feel slightly sad (but I won’t cry).” Who but Morrissey could write those words and sing them with such aplomb. I may still have that mixed tape somewhere in my basement and though I haven’t listened to it years, I still remember that this was the way side two ended.

This here’s a song that I never fully appreciated until I heard it on the dance floor. As I mentioned above, The Smiths were ruined for me early on by my friend John and I considered the band just as morose and overly dramatic as my friend. Still, there were a few of their tunes that I still enjoyed in spite of myself. “This charming man”, however, wasn’t even on my radar until a certain Thursday night at The Underground, the main campus pub at York University in Toronto, where, for a time in the mid-nineties, they used to have an alternative music night. I was already out in the middle of the dance floor with a bottle of 50 in my hand when whatever song I was dancing to ended and the jangly guitar intro to “This charming man” came on. For whatever reason, though I was probably heavily intoxicated, I stayed on the dance floor and allowed the jaunty drum beat and bass line, the bopping, shiny guitars, and Morrissey’s stylistic vocals to keep me moving.

Originally released as a B-side to “William, it was really nothing” in 1984, “Please, please, please” later appeared on pretty much all their compilation albums and also made an appearance on the soundtrack for the film, “Pretty in pink”. And if you listen closely, an instrumental version of a cover of it by The Dream Academy can be heard during the art gallery scene in the film “Ferris Bueller’s day off”. The original version of “Please, please, please let me get what I want” is a quiet and melancholy track that boasts Johnny Marr on mandolin and Morrissey playing the self-pity card and getting away with it like no one else can. “So for once in my life let me get what I want.” But the real reason I know all the words and nuances intimately was that due to its short length, this song found itself on countless mixed tapes that I made, squeezed in at the end of one of the sides to fill the leftover tape on a C90.

Not everyone out there may know who The Smiths are but I think the chances are reasonably good that many people have heard what is arguably their best, and is definitely their most popular song: “How soon is now?” You can likely chalk it up to its repeated appearances in popular culture. For points of reference, I’ll provide first an obscure example. Beer drinking Canadians of a certain age might remember a television commercial in the early nineties for a fad beer called Labatt Ice, which also featured an appearance by dancer/actor Alexander Godunov. More famously though, a cover of the song by Richard Butler’s post-Psychedelic Furs band, Love Spit Love, was used on the soundtrack for the 90s teen-witch movie, “The craft”, and then again later, as the theme song for a witchcraft themed television series called “Charmed”. From here, it’s been used many times over in other films, television, and film trailers. So much so that that howling slide guitar sound is tattooed into our collective psyche and now the song is often linked to witchcraft. The Smiths’ original version was released for the first time as a B-side, also to the 1984 single “William, It Was Really Nothing”, and then later released as a single in its own right in 1985. It features a wicked vibrating guitar effect throughout the song that was created by Johnny Marr and some nifty studio magic and also some of the finest drum work we were ever to hear from Mike Joyce on a Smiths recording. Morrissey’s lyrics are typically maudlin and melancholy, singing lines from the point of view of someone who is lonely due to chronic shyness. “I am human and I need to be loved.” Nothing at all to do with witches.