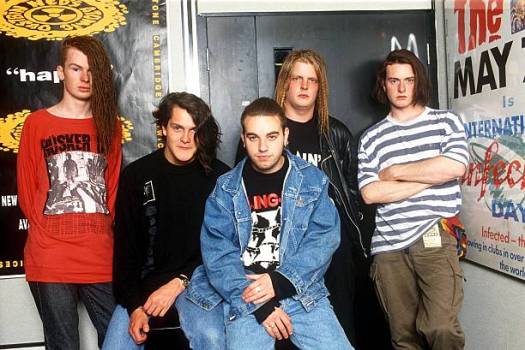 “Kill your television” was first released as a single in the UK in 1990 and in the US in 1992. So why is it on my best of 1991 list? Because that is when I first heard it while listening to Ned’s Atomic Dustbin’s debut album, “God fodder”. And well, it’s my list dammit.

Ned’s were a five piece that formed in Stourbridge, England in 1987. They were slotted into the Grebo pigeonhole with compatriots, The Wonder Stuff and Pop Will Eat Itself, and they certainly were as fun-loving as those other two bands. However, their sound was definitely more aggressive from the start and highly irregular, with dual bass players leading the assault. “Kill your television” is a perfect example of what they were all about. Storming out with total abandon, without a care of the consequences. Complete bluster and adrenaline, stage diving, arms and long (perhaps crimped) hair flailing, just a ruckus, really. But a hell of a lot of fun.

I distinctly remember watching an interview with frontman Jonn Penney (distinct because I had it on VHS at one point) on the old Friday night video show, “Good rockin’ tonight”. And he was asked about names, the band and the single. I’m pretty sure he was regretful about the band name. The band had thought it funny at the time, all being youngsters, some still teens when the band formed, but later, felt a bit saddled with it after they had found success. As for the song, he had still found it quite funny because people were constantly asking about its meanings, looking for depth and profundity where there was none. You’re never really going to find much of that with early Ned’s. In truth, the song title was lifted from a sticker that bassist Alex Griffin had picked up somewhere and had affixed to his instrument.

Sometimes in life, you need something as simple and as fun as that. And Ned’s were always willing to abide.