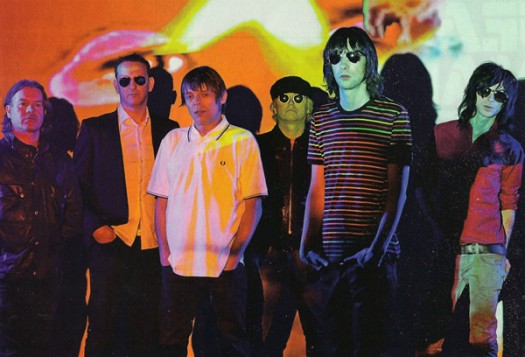 A couple of weeks ago, I posted about Primal Scream’s “Loaded” as my third favourite tune of 1991. That particular ditty turned me on to the Primals and then, after buying and listening to “Screamadelica”, I quickly grew obsessed.

I got to see them live in 1994, when they opened for Depeche Mode at Kingswood Music Theatre, a show I saw with my friend Tim, my eventual wife Victoria, and her cousin Rosa. By this time, Primal Scream were touring “Give up but don’t give out”, a blues-rock hippie jam that I didn’t love quite as much as its predecessor but that had some great, great tunes. After that album didn’t perform quite as well critically or commercially, the band regrouped and dropped “Vanishing point” on all of us in 1997. I survived that bomb but 2000’s “XTRMNTR” almost killed me. In its wake, a handful of years needed to be taken before I was ready to dip my toe back in, eventually doing so with “Riot city blues” in 2006.

So yeah, I completely missed their 2002 album “Evil heat” upon its release. I only got to it after I warmed to the next few albums, building a lasting love rather than the meteoric lust and infatuation I suffered with “Screamadelica”. And only then was I able to revisit their back catalogue without such a black demeanour. I still don’t think it’s their best work but after the maelstrom that was “XTRMNTR”, Bobbie Gillespie and his cohorts really needed a bridge album and in that, “Evil heat” was successful.

“Miss Lucifer” is one of the album’s hot spots, the first single released off it, and it’s a real dancefloor razer. Don’t go looking for any witty or deep lyrics here because you’ll find none. It’s your typical femme fatale/evil woman motif and warning. It’s the drone and angry beat that’s special here, hoofing it like Saturday night’s leftovers from Prodigy’s Friday rave and tumble. Gillespie whispers and hisses and spits venom before getting to the chorus and turning admonitions into invitations to “shake it baby”, over and over and over again.

It’s not “Loaded” but it’s a trip nonetheless.