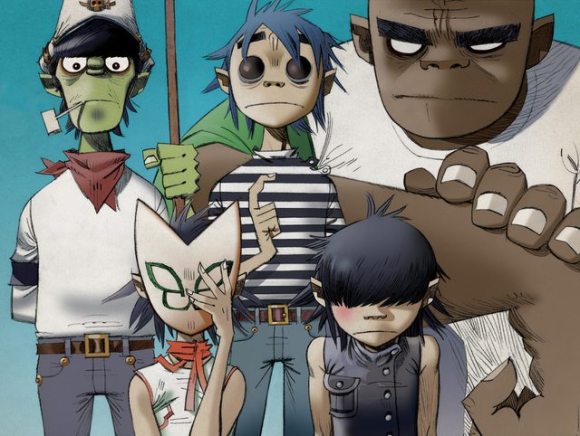 Anyone who’s been reading my words on music for a while now knows that I’ve been a pretty big Blur fan since the very beginning. But what about Damon Albarn’s other music projects? Well, I did enjoy me some of The Good, The Bad & The Queen’s only LP and his solo album, “Everyday robots” also had some very fine moments. Where Gorillaz are concerned, however, my thoughts are decidedly mixed.

I thought the concept was fantastic. A virtual band that was just as much a multimedia experiment as it was a serious musical project, throw in Albarn’s talents and those of Jamie Hewlett, one of the comic artists behind “Tank girl” and you have some serious potential. But given the heavy hip hop influence, especially on the first couple of albums, I didn’t find myself all that interested. There were exceptions, of course. I really liked the first single, “Clint Eastwood”, and also, “Hong Kong”, off the “Help: a day in the life” compilation and this track, “Up on melancholy hill”.

It appears on Gorillaz third album, “Plastic beach”, but I didn’t hear it there first. I blame AUX TV for this. For a while there back in 2010, I spent a lot of time watching that channel, or half-watching it, as the case may be. I was quite enthused to find a cable channel that actually played music videos again. And not just the popular music videos, but quite the mix of music, much of it new and hip. It became part of my early morning routine to switch AUX TV on and listen to tunes while I was making my lunch and brewing espresso for my wife’s and my morning lattes. I discovered a lot of music in this way that year and also rediscovered my love for watching music videos.

The video for “On melancholy hill” was played regularly on AUX in the summer of 2010 and it’s a great one too. Some pretty fantastic animation by Hewlett has band member Noodle gunning down some Korean War era planes before surviving a boat explosion in the open waters. Other fantastic adventures follow under the deep blue sea that include the other band members and some “superfast jellyfish” but you don’t need me to explain all that. You can just watch the video below.

And oh yeah, the song… well, it’s a catchy one. A real pop gem. It could have something to do with the time of year that I first heard it but it’s a real summer song for me. It’s sunshine and happy days. It’s not your typical danceable number but I think it would be a fun one to hear at a club nonetheless. Alternatively, it fits quite nicely in a lounge or playing on your boombox while you languish out by the pool. The melody is just so simple and laidback and Damon Albarn’s vocals are forefront, drifting lazily over the synths, like he’s there just singing you off to la la land. Beautiful.

When I ask what they’re listening to at school, Several kids over the years have been listening to Gorillaz – it’s weird thinking that for them, Blur was Damon Albarn’s other band, rather than the other way around!

I know! That’s something I can never get my head around.

I like this but Dare is the one for me, every time. I find them inconsistent.

Agreed. On the inconsistency

I was really disappointed by Plastic Beach (much like the new one). I don’t know if it’s the result of too many guests or what… anyhoo, this is the best track on there by a country mile.

I didn’t have any expectations after the first album. With every album, I just wished for more Blur albums but to each their own. People really like them. I like this song.

That’s fair enough… I didn’t have that deep connection to Blur. I love Demon Days. I genuinely believe that’s the best thing Albarn’s done. Utterly brilliant album. And, as you know, I also rate the sole The Good, The Bad, & The Queen album highly, too.

I agree, Damon’s performances outside Blur have been decidedly mixed. There’s been a few decent songs, but they’re incomparable to any Blur material. Here’s the nub. Consider Blur’s greatest hits in comparison to a greatest hits compilation of his post Blur stuff?Frankly, there is no comparison IMO.

[…] I posted some other words on Gorillaz and one of the few other songs of theirs that I liked, “On melancholy hill” (#13 on my Best of 2010 list). In that same post, I made mention of this track, which also […]

[…] pretty much oblivious to them. I saw the pretty hilarious video one morning on AUX TV, which I’ve mentioned before in these posts on my Best of 2010, and then, the next morning and the next. I wasn’t at all […]

[…] made and enjoyed my morning coffee. I discovered many a new tune and artist in this way, just check here and here for a couple examples from that Best of 2010 […]