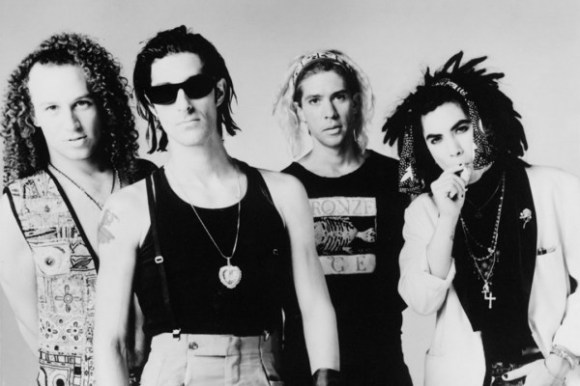 Haha. If it were only as simple as all that. Farrell does like to play with us all. After hearing his intro to this very tune on the “Kettle whistle” compilation, where he muses about and chastises a fan for stealing another man’s girl, worse yet, his best friend’s girl, I wonder if anything Jane’s Addiction does is so simply black or white.

I’ve already made mention that “Ritual de lo habitual” was my introduction to these guys when I posted about “Stop!” at the number 26 spot on this list. If you’ve read those words, you’d know that this album is still my favourite album in their catalogue and using logic, you might surmise “Been caught stealing” as the likeliest candidate for my favourite of their tunes. You’d be right. It is also their biggest tunes, and so probably, a lot of people’s favourite Jane’s Addiction tune. The video and its circulation on the music channels was one of the major contributing factors to its success. The video matched the song in chaos and hilarity, featuring members of the band shoplifting in a ridiculous manner.

“Been caught stealing” is a rebel without a cause. It rocks a serious groove, the bass is heavy and funked out, the guitars scream metal and the badass lyrics are sung in a badass manner. Yet as much as I loved it from the beginning, I loved it even more when I heard the outtake version on the aforementioned “Kettle whistle” compilation. Go ahead. Have a listen and glory in its laidback lounge aroma, replete with steel drums and scat singing.

Surely it would also crack the top 5 of a ‘dogs barking’ tracks list too!

This was the first song I ever heard by Jane’s Addiction, and it was one of those “WTF, I’ve never heard anything like this before” moments. It drew me in, chewed me up and spat me out a huge fan of theirs.

Don’t you love being chewed up by music?

First song of theirs I ever heard, but I didn’t really love it or explore their stuff until 97. That would have been just before Kettle Whistle, actually. I immediately fell in love with it then… musta rediscovered it at the right time.

Sometimes that happens. Slowdive was like that for me.

Man this track was everywhere and with very good reason. Crank it!