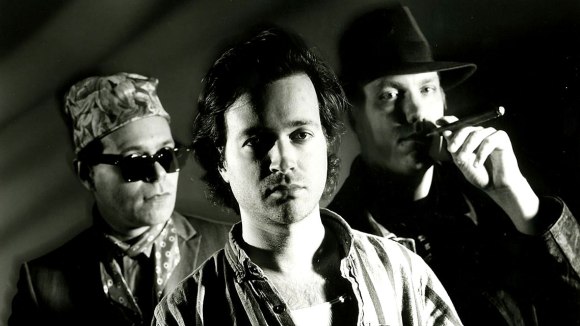 “Can I… Can I put on something like: This is American music. Take one. One, two, three, four…”

Whenever I hear or think about the band Violent Femmes, I think of my friend Jeff from high school, even though I haven’t seen him in a couple of decades (not counting the odd word on Facebook). This is because I lent him my recorded copy of Violent Femmes’ debut self-titled album on cassette at the beginning of our final year (OAC, for those in the know) and no word of a lie, I didn’t get it back until the end of that school year. I started out asking for it daily and he would always make excuses and promise it back the next day. I stopped asking so often after a while and had almost given up hope, only keeping up the charade as an ongoing joke, but then, on the final day of classes, he returned it to me.

Save for the trio’s aforementioned debut, the Femmes have always operated on the periphery of the music industry, sitting precariously on the edge of alternative and mainstream culture. They have a number of songs, though, thanks to usage in films and appearances in TV commercials, that have become part of our collective consciousness. I’d say “American music” is one of these. Though only achieving modest success and moderate airplay, it has become a favourite at the shows the band still performs today.

It is a typically upbeat and off-kilter number for the group, hinting at a love for the red, white, and blue and the Norman Rockwell lifestyle. Gano whines and yelps, Ritchie’s bass lines boom, and Victor DeLorenzo gets us all up dancing at the prom with his get up and go drum beats, whether we have a date to dance with or not.

Haha. Did you get to OAC or did you they get rid of it before you got there?

I think when I was in OAC, the grade 9s that year were to be the first on a 4-year program!

I remember it being a big thing when they phased it out with the so-called double cohort. You might have another opinion but I don’t think it should’ve ended.

As a December birthday – even with OAC, I felt young as an 18-year-old heading of to University. So I imagine a lot of the 17-year-olds feel even less prepared. And new cassettes aren’t cheap either, I saw one recently for $15! in 2018!

I can only shake my head at the price of cassettes. I wasn’t quite ready to go to university at 20… haha… but that’s another story.

Cassettes should never come back though.

I don’t know anything of theirs other than the self-titled album and Color Me Once (my introduction and favourite song of theirs).

I keep meaning to check out more stuff and given this is pretty good, I’ll perhaps gravitate towards the album.