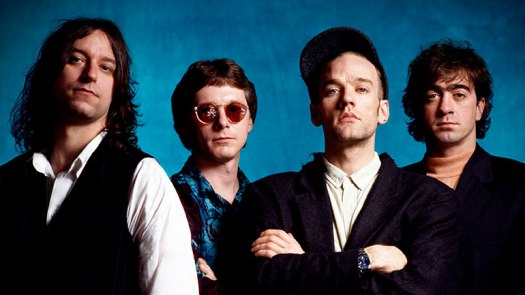 R.E.M.’s “Out of time” was a massive hit for the band in 1991 and many, the band included, would chalk up the amount of units sold to this one song: “Losing my religion”. I’ve already posted words on thIs great tune in these pages when it appeared on my Top Five R.E.M. Tunes post a year or so ago. So I’ll try not to tread the same ground too much here.

I definitely spent a lot of time with “Out of time” that year, having just recently become a fan of their music. I can remember listening to it on constant repeat while stripping the wallpaper from our upstairs hallway. Hot water, a sponge, and a scraper. It was a crappy job that was made slightly easier by the lightness and jangle of the album and of course, I always got that burst of energy whenever it came round to “Losing my religion” again.

It’s not super upbeat or high energy but there is something bright about and at the same time, it’s dark. It’s quite different for a hit pop song in that it leans heavily on the mandolin to keep it afloat. In fact, the whole thing is built around a riff Peter Buck came up with while fiddling around, trying to learn how to play the instrument. If you listen to everything on offer here, you’ll realize that the bass line and drums are mostly simplistic, taking a back seat to mandolin while it jumps around and jangles, much like Buck’s guitar would on any other R.E.M. song. Orchestral strings and hand claps were added to fill the midground between the Buck’s noodling and Mills’ bass and to give it more oomph.

Stipe’s vocals are mostly understated and plaintive, singing words that sound more deep and existential than they are meant to be. Of course, the religious imagery in the award-winning video doesn’t help to clear things up any. Stipe has tried to help things along, though, explaining that the title is an expression that basically means losing one’s shit and that the song is really just one of obsession, much like “Every breath you take”.

“Every whisper
Of every waking hour
I’m choosing my confessions
Trying to keep an eye on you
Like a hurt lost and blinded fool, fool
Oh no, I’ve said too much
I set it up”

The great thing about their songs is that you can choose to adapt their original meaning or choose your own adventure. This tune, however, is so ingrained in all of us. It’s timeless and beautiful. It’s R.E.M.