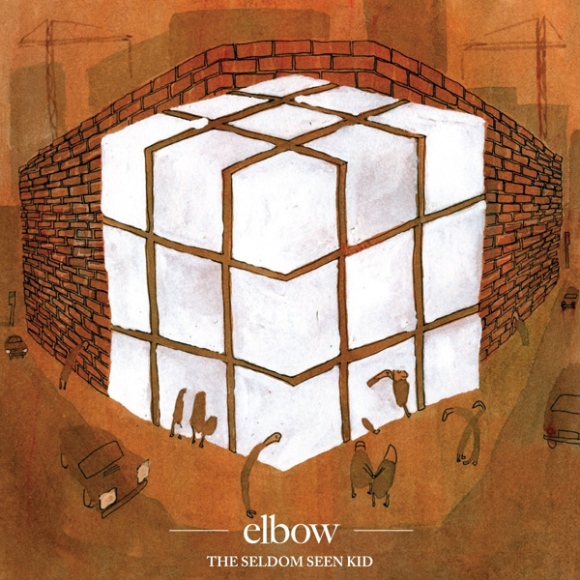 I’d like to say that I’ve been a fan of Elbow since the beginning but that wouldn’t be technically accurate. The band has been around since 1990 or 1991, albeit under a different name up to 1997 when they adopted their current moniker. I can say, however, that I caught on to their debut album, “Asleep in the back”, shortly after its release in 2001. (Yes, it took them that long to finally get a record out but that’s another story.) The album quickly became a favourite, spent months in my CD carousel, and I would name-drop them as often as possible when talking music with friends. It got so that it was a running joke. But I couldn’t help it. I just couldn’t get enough of this band’s dense atmospheric sound, all anchored by Guy Garvey’s unique, emotive vocals. They were like nothing else out there at the time. I once tried finding a comparison point and the best I could do was put Peter Gabriel in charge of a more-orchestral oriented Coldplay or Gene but even that seemed like I was trying to force it too much. My crush on Elbow only grew over time, as with each consecutive album their sound grew lusher and more complex, and they veered further and further away from those tropes that defined the traditional rock and roll band.

Elbow’s “The seldom seen kid” is the band’s fourth studio album and first on the Fiction records imprint. The album won the 2008 Mercury prize, an honour that the debut was nominated for but did not win. It certainly was up there with the debut as one of my own favourite of Elbow’s albums up to that point, setting a high water mark that its successor, 2011’s “Build a rocket boys!” couldn’t possibly reach.

‘Beauty’ or ‘beautiful’ are terms that are often inaccurately ascribed to music and are terms that shouldn’t be used lightly. But in Elbow’s case, ‘beauty’ is the most apt term I can think of and it could easily be the name of their particular style of music. “The seldom seen kid”, like Elbow’s other albums, doesn’t just create at an atmospheric sound, but whole worlds for you to inhabit, to live and laugh and cry in, as one song bleeds into the next. Each song is painstakingly arranged, the opulent instrumentation acting like a protective carriage to its soul: Garvey’s voice.

If you’ve never listened to Elbow before, “The seldom seen kid” would be a wonderful place to start. Don’t know where to begin? I’d say at the beginning but failing that, here are my three picks for you to sample.

”The fix”: “The fix is in. The odds that I got were delicious. The fix is in. The jockey is cocky and vicious.” This track has the added bonus of being touched by the hand of another talented musician with immediately recognizable vocals: Richard Hawley. His rich baritone vocals jive perfectly with Garvey’s, either while trading coyly or while in pleasant harmony. It is a slinky piece, obviously influenced by Hawley’s mere presence and his penchant for gleefully old-school sounds, tempered with his golden work on guitars.

”Grounds for divorce”: “There’s a hole in my neighbourhood, down which of late I cannot help but fall.” With a song title like this, it’s fitting that the song plays like one a chain gang might sing. From the marching drum beat to the call and response vocals in the intro to the dirty, southern bass line throughout, Garvey us leads through a rousing romp that is guaranteed to get you stomping.

”One day like this”: “So throw those curtains wide, one day like this a year would see me right.” With six and a half minutes of string flourishes, peppy beats, and uplifting vocal twists and turns, this song makes an ambitious bid for the title of my favourite Elbow track. It’s just one of those songs for which the volume can never be turned up quite enough. While listening to it, you want its blissful ecstasy to fill every crevice of your hearing, to blot the sounds of your humdrum day. You want to join in on the singalong refrain that carries on through the last half of the song with the thought that maybe tomorrow will be that day. Yup. Beautiful.

Man, I have pals who still tell me that this stuff is the best music they’ve ever heard. A big album for some. I’ve just never been able to enjoy anything they do, I’m afraid… I’d sooner listen to Coldplay.

Haha. While writing this, I kept thinking how you weren’t going to approve. Fair play. I love their stuff though.

Fair play to you, man. I often find some good stuff here, so I’ll let you off with this one.