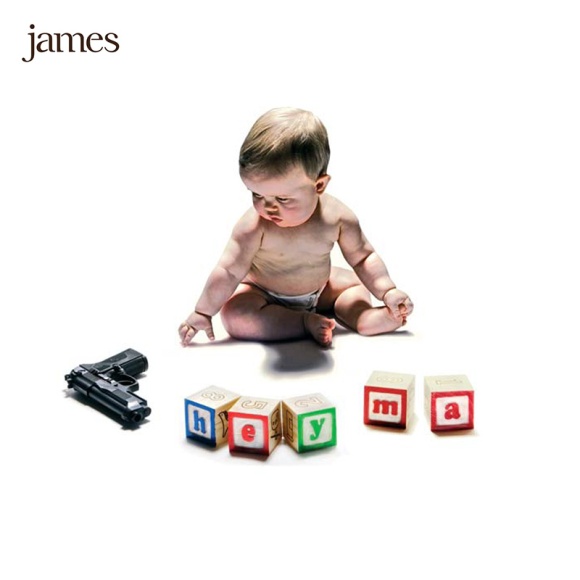 For those of you who have been following this blog (and its predecessor) for a good amount of time, this pick for the number one spot on this best albums of 2008 list might not come as a huge surprise. You’ll know already that I’m a pretty big James fan and that I continue to follow this band and buy their albums, despite the face that their popularity in North America is pretty much limited to just the one song. However, back in 2008, this pick was a huge surprise, most of all to me.

I had loved James throughout the 1990s and was a little bit crushed when I heard Tim Booth was leaving the band in 2001 to pursue other efforts. They reformed the group six years later when Booth returned to the fold and saw success with their comeback shows. It all went so well that they decided to reconvene for a new album, news I took in with a good deal of reservation. These days, a lot of the bands I loved in my youth are coming back out with brand new albums, many of them quite successfully, but in 2008, the bands that I had previously witnessed trying to recapture the magic of their heyday had not gone as particularly well. As it turned out, though, “Hey ma” was a revelation. It was an album that didn’t try to ride on the band’s back catalogue’s coattails, instead, forging forwards, finding its own feet, and can stand tall with any of their previous work.

This was no more obvious than when my wife and I trekked down to Montreal in September of 2008 to go see the group in a small club. James is a band that my wife loves as well as I and we have both agreed that this show stands as one of our favourites ever. It was a show that both of us sang along to every song in the set and the fact that the setlist included a good deal of “Hey ma” just proved that we loved this album just as much as their previous material.

For those that don’t know the band, James plays big sounding tunes with lot of atmosphere and soul, all anchored by Tim Booth’s expressive vocals and poetic lyrics. Any of the three picks below could stand as a good starting point and if you like these, I recommend voyaging back to check out some of their previous albums as well.

“I wanna go home”: “Kissing is forbidden. Biting leaves marks. Sex is overrated. I need to dance.” The final track of the album is the epitome of slow build into oblivion and ecstasy. It begins with a rumble of bass and the tease of cello, synthesized, of course, and Tim Booth in agony. Then comes the threat of a beat, a tribal one at that, and a whole lot of incidental noise filling in the negative space. These become louder, like shrieking ghosts gaining confidence as the David Baynton-Power asserts himself firmly at the kit. Finally, it is a cacophony of joy and Booth can go home. And dance.

“Waterfall”: Opens with a crushing, thumping beat but not long after, the drums are joined by jangling guitars and Andy Diagram’s horns. At the verses, things let up and Tim Booth goes on about being crushed by the weight of material things. “Watching too much TV I’m an actor in a puppet show. There’s so much stuff in my life no room for me to grow. One day I’m going to break from my life due south down to Mexico. I’m going to burn down my house it’s the only way to let it go.” Then, at the chorus, the rest of James’s players join in, letting loose a waterfall of sound (so to speak), that big sound again. Those of you from Canada might find the track familiar and this is because it was used as the background for a commercial here. But for the life of me, I can’t think of what it was for, nor could I find it with a quick google search. Maybe one of you can help me out here…

“Hey ma”: You might have noticed that the cover of the album is a bit provocative and the band was firm in keeping it as it was (though the gun was removed from the image for the US release). The title track is just as heavy handed, an obvious poke at the quick and just as heavy handed reaction to the 9/11 attacks. “Now the towers have fallen, so much dust in the air. It affected your vision. Couldn’t see yourself clear. From the fall came such choices, even worse than the fall.” And yet, it is also a great pop song, perhaps just as danceable and ear worming as “Laid” was a decade and a half earlier. Listen to it a few times and see if you don’t find yourself singing along to the chorus lines, “Hey ma. the boys in body bags, coming home in pieces.” And that’s the beauty of James: thought-provoking lyrics set to pop hooks wrapped up in a million layers of big sounding music.

I wasn’t expecting this one, JP. I thought “surely he’s picking The Gutter Twins’ Saturnalia!?” 😃

I think I missed this one when I was going through the discography last year (that was last year, right?). Sounds pretty decent…

Haha. Have not heard The Gutter Twins. Good one?

Man, The Gutter Twins is one of my favourites. Lanegan and Dulli. Brilliant stuff. Rumour has it there’s a second album in the works.

Must investigate. I love Lanegan’s voice.

Aye, he’s got a Helluva voice.

[…] favourite albums of 2008 and in talking about how James’s 10th album “Hey ma” was my number one, I also referenced their show that I caught in Montreal that year and how it was my favourite (as […]