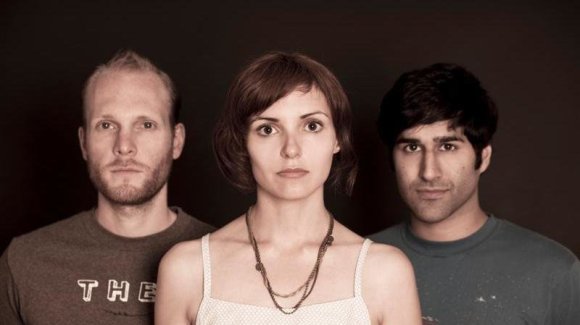 Just after Christmas in December of 2011, I joined my friend Tim on a short road trip out to Cambridge to visit his friends Greg and Wendy. They had recently opened a used records and book store called Millpond and we met up with them there to check it out, just before they closed for the day.

(I browsed their record selection with some interest, though I was still a few months removed from starting my collection in earnest.)

Afterwards, we went out for dinner, where there were plenty of laughs and reminiscences and of course, talk eventually turned to music. The fact that I had recently starting blogging about music was raised and I showed them the home page on my iPhone, which at that moment was deep in the depths of my first ever end of the year, best albums countdown. Wendy exclaimed that she liked the look of one of the album covers and when I looked at the one about which she was talking, it was The Rural Alberta Advantage’s sophomore album, “Departing”. Its cover art is mostly white, what looks like a mostly untraveled two lane highway obscured by whiteout conditions, snow sliding across the asphalt, a set of headlights barely visible in the near distance. Incidentally, it aptly foreshadowed our drive back to Toronto as we were hit by one of those surprise snow storms particular to the areas surrounding Lake Ontario.

Without digging back in the archives of my old blog, “Music Insanity”, I couldn’t tell you what position “Departing” held in my top ten that year but I think if and when I redo it on these pages, this album would still be somewhere in the mix. The Rural Alberta Advantage is an indie rock trio, that despite their moniker are actually based out of Toronto. Their sound is the happy melding of Nils Edenloff’s rough guitar manhandling and raw vocal chords vocals, Amy Cole’s delightful keys and other percussion flourishes and her soft touch backing voice, and of course, Paul Banwatt’s frenzied impression of Animal punishing the drum kit. Every song on the album, nay, on all their albums, is an adventure.

The first half of “North star” is more sparse than the usual RAA tune. Cole’s piano chords are like a punctuation on Banwatt’s drum rhythm, those that just chug along like the sleepers on a night train, above whom the glass ceiling looks over the prairie night sky and the stars are everywhere, a million pin holes in the night. Then, the piano becomes more than an accent and fills all the rest of the empty space with chimes and bass reverberations. Edenloff, meanwhile, is almost restrained, singing forlornly about a love that might never be.

“We’re far apart under the same sky,
You’re diving in the dark I’m in the city’s lights,
Wishing just to see you for another night.”

If you’ve never listened to the RAA before, I suggest you give the song below a go. You’re welcome.

I like this one, JP. I’ve still only heard Mended With Gold, but I like that one. Currently hitting up Departing on Spotify after being inspired by this. Cheers!

Nice! Let me know what you think. I love this band lots. They do great covers of ‘Eye of the tiger’ and the Littlest Hobo theme song.

I really enjoyed it. They seem to have a knack for writing tunes that ease their way into your head. I was humming songs from it afterwards.

Agreed. And their drummer is just phenomenal. So good live.