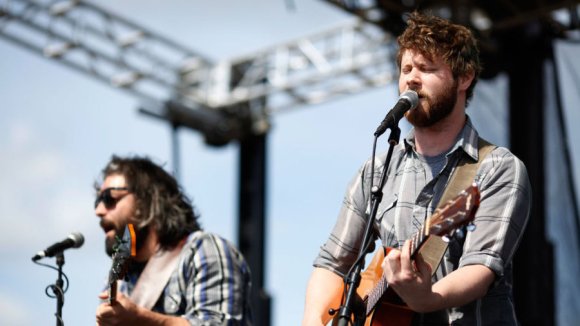 Maybe you folks outside of Canada can help me out here. I’m not sure at all how well-known West Coast singer/songwriter Dan Mangan is outside of his (and my) country but around these parts, he definitely does quite well. In 2011, he released, “Oh, fortune”, his third full length and second on indie super-label Arts & Crafts. It was his second album to be long-listed for a Polaris prize (Canada’s equivalent to the Mercury) and the following year garnered the man a couple of Junos (our version of the Grammy).

As an album, the lush instrumentation that filled out his gorgeous songwriting and baritone vocals was a stark contrast against the relative austerity of his acoustic-laden previous effort, 2009’s “Nice, nice, very nice”. The subject matter was still quite dark, even in its humorous moments, but it all felt cleaner and more accomplished. “Post-war blues” was the obvious single on the album, a rousing number that starts with a drum roll and leaps into Arcade Fire territory, circa “Funeral”, complete with chugging beats, screaming guitars and a string backbone. And in that kindly voice of his, he sings words that seem oddly reminiscent of their hope in youth and cynicism with the aged.

“Let’s start a war for the kids
A purpose for which to unite
Make them some words they can mince
What they don’t know, They won’t mind”

And yes, for those Kubrick fans out there, you really need to watch the hilarious, Strangelove-inspired video. The pair, video and song, are just so great together and if you do manage a chance to see Dan Mangan perform live, definitely take it. He definitely made a bigger fan of me.

Nice point about seeing him live – I saw him a few years ago with the RAA, a formidable double bill!

Yes. That would’ve been a great double bill.