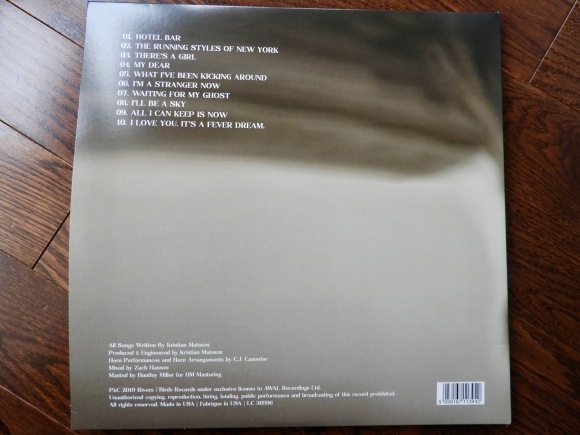 The skinny: Much like Piroshka’s “Brickbat”, an album I posted for this series just over a week ago, The Tallest Man on Earth’s latest didn’t quite make my top ten favourite albums when I finalized my list but it bore mentioning nonetheless and I snuck it in the banner photo at the top of that introductory post. Funny thing about this record, though, is that its purchase was almost by accident. Indeed, I was at one of my local record shops just before this year’s Bluesfest, looking for the latest album by Colter Wall, so that I could properly prepare for his set at the festival, and I saw this copy of “I love you. It’s a fever dream.” sitting on the shelf. I had almost forgotten that the Swedish indie folk singer/songwriter was releasing his fifth album this year but when I saw it, I remembered his own set at Bluesfest from a few years before and knew I had to buy it. It’s plenty more excellently written tunes, sown from much the same plot as his previous two albums, but the sound just never seems to get old. And just check out that colour! It reminds of the old glow-in-the-dark frisbees, so much cool that I had to post an extra photo of it.

Standout track: “What I’ve been kicking around”

4 replies on “Vinyl love: The Tallest Man on Earth “I love you. It’s a fever dream.””

I haven’t listened to The Tallest Man on the Earth for absolute ages (since The Wild Hunt). I don’t think he did anything that put me off following up on releases, I just stopped following him and completely forgot about him… I’ll check this out and maybe play catch up with the other couple of albums I missed!

You won’t find he’s changed much but he’s such a great songwriter, it doesn’t seem to matter.