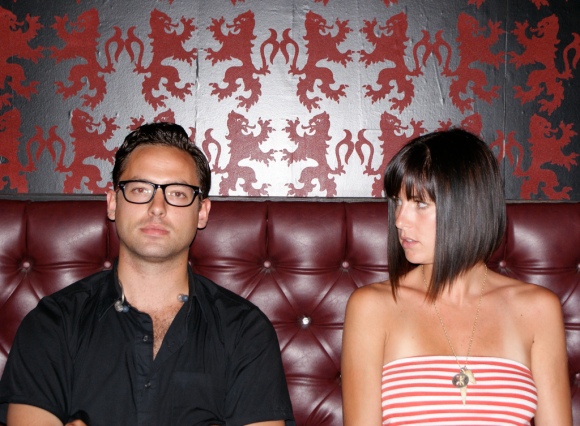 Let me know if this has ever happened to you.

You discover a band or solo artist and download or purchase a physical copy of their album. You really enjoy it. You listen to it a few times. And then… you forget about it. A few years later, you’re trawling through the upcoming releases list and notice an album by a name that sounds familiar to you. You check out the advanced single (or two) and like what you hear but damned if they don’t sound like you’ve heard them before. So you go to your massive iTunes playlist and sure enough, there they are. And you go about rediscovering them all over again. And you know that you didn’t lose track of them because they’re a forgettable artist or anything like that. It’s more symptomatic of having too much music available to our collective fingertips, a good problem to be sure, but also one that is a new one in this internet world in which we live.

Phantogram is one such band for me. I got into the Greenwich, New York-based duo with the release of their debut album, “Eyelid movies”, and was completely absorbed with the cinematic and atmospheric worlds they created with their music. I was then reacquainted with them in 2013 with the release of a handful of singles in anticipation of “Voices”, the sophomore full-length that came out the following year. In Phantogram’s case, it definitely wasn’t them – it was me. They were pretty active in the four years between albums, having released a couple of EPs and having collaborated with a bunch of notable artists, like Big Boi and Flaming Lips. Apparently, my listening ears were elsewhere.

“Mouthful of diamonds” is one of the incredible tracks off Phantogram’s debut that completely drew me back into the fold while waiting for “Voices” to be released. It’s the album’s lead off track and explodes with its intense beat and low end layer, while synth screeches flit about with Josh Carter’s jangly guitars and Sarah Barthel’s soft and breathy vocals. It is dark and haunting. It is a dream from which you don’t want to awaken. It is a futuristic dance club in some sci-fi flick yet to be made. It’s all this and everything else your mind can imagine while you close your eyes and sink back into your couch with the song’s beats thumping through your earphones.

And I’ll tell you something else. Two albums and two live sets later, and I definitely haven’t lost track of them again.

Nice! I like Josh Carter’s dance styles. I think I could copy those moves. They remind me of another band and I can’t for the life of me think who right now.

I can relate to that opening paragraph – I can’t think of a specific example at the moment, but I’m sure I’ll have that “oh yeah, these guys!” reaction again at some point soon!