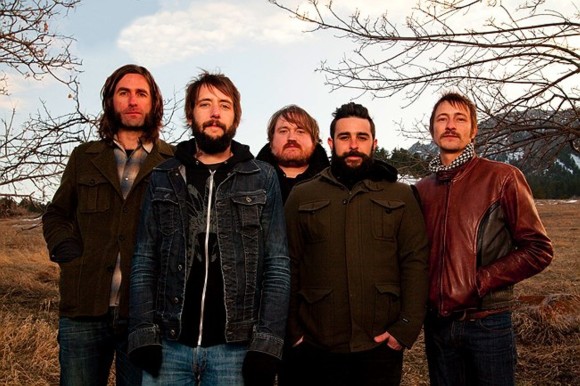 At the number seventeen spot on this, my best of 2010 list, is “Compliments”, the first single off Band of Horses’ third album, “Infinite arms”.

To be honest, Band of Horses is a group that I know very little about. I can tell you (because I looked it up) that they are an American rock band formed by Ben Bridwell in 2004 and that he really is the only constant in a band membership that seems to be forever in flux. I don’t own physical copies of any of their albums so I’ve never read liner notes or lyrics and never really knew what any of them looked like until I watched a bit of live concert footage on YouTube at my buddy Tim’s place one night. I know that I really liked their first three albums and that those three albums are so consistent that I’m often not sure which songs appear on which album and am even not quite clear on certain songs’ titles, not even the ones I really like.

The funny thing (to me anyway) is that while listening to their music, I was able to create a picture of them in my head and when I saw them on the aforementioned live footage, they closely resembled the image I had of them in my head. On that night anyway, they were a southern rock band, kind of a CCR or Lynyrd Skynyrd for the 2000s, leftover hippies, shaggy and bearded, decked out in jeans and non-descript T-shirts and bandanas. Not that there’s anything wrong with any of that.

And now that I’ve gotten all that out of the way, I gotta say: “Compliments” is a rocking track! It’s anthemic and big. Right from the get go, the reverb guitars catch all attention and the bopping rhythms and crashing cymbals make you want to get up and dance. And if not to go that far, at least to stomp your feet or clap your hands or to join in on the rhythm by making noise in some other way. The gang vocals too, beg for you to join in, no requirement for perfect pitch or a certain tone of voice. Shouting is just fine with Bridwell and company. And damned, if doesn’t feel great.

I’m in the same boat with these guys – what I have, i quite like, but I couldn’t tell you any of the song names!

Well, remember this one cuz it’s
a good one. That’s my plan.

It’s a good no frills rocker. They certainly bring classic rock into the new Millennium

Hmm. It’s a funny idea of bringing the classic into the new. But it’s definitely true here.

This is probably the best track on Infinite Arms, but I lost touch with these guys after this album, as it just didn’t live up to expectations (the first two albums are great).

Did you not think it was as good or was it just too much more of the same?

I didn’t much like it. It’s definitely a slicker sounding album… the first two are just really great, though.