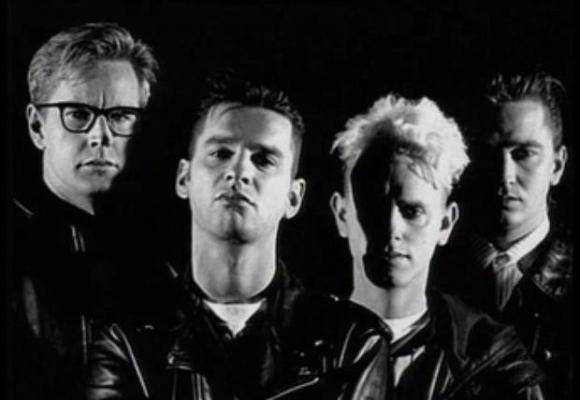 Just outside this list’s top ten, at the eleven spot, is perhaps one of the biggest songs by one of alt-rock’s best known bands: “Enjoy the silence” by Depeche Mode.

This British synth-pop, new wave act were originally formed by Martin Gore, David Gahan, Vince Clarke, and Andy Fletcher in 1980. Vince Clarke left the group after only one album and was replaced by Alan Wilder, who stuck with the group until 1995. Depeche Mode has operated as a trio ever since. From the year of their inception through their first handful of albums, they steadily built a following, first domestically and then, internationally, especially with 1984’s “Some great reward”‘ but it was 1987’s “Music for the masses” and its subsequent tour that really broke them in the US. Then came “Violator” and they were huge.

“Enjoy the silence” was one of two advance singles that foreshadowed the brilliance of the record. The song is instantly recognizable with that steady drum machine beat, alternating synth washes that sound like breaths of fresh air, and that guitar melody, an instrument that Gore was newly adding to the band’s usual synth heavy sound up to this point. And of course, there’s those opening lines that lead vocalist David Gahan intones in his perfect baritone: “Words like violence, break the silence, come crashing in, into my little world.”

He’s almost perfectly describing an introvert’s crisis. He does go on, of course, introducing a girl to the picture, a lover’s embrace, late at night, where words only ruin the mood. Is there still love or is it just the physicality? Or is the girl just an idea, or perhaps a symbol, a representation of all that causes him pain? Then, there’s the music video that suggests another interpretation. Shot by Anton Corbijn, a frequent music video collaborator of the band, it depicts as Gahan as the little prince of literary fame, roaming many isolated landscapes with a lawn chair, perhaps in search of some solitude and some quiet.

Whatever the meaning behind the lyrics, the tune is a beautiful beast, built both for the dance floor (as evidenced by its many remixes) and for nights alone, under the shroud of darkness. Truly full of grace and worthy of all the reverence bestowed upon it. Have another listen on me.

It truly is a beautiful beast, easily my favourite DM track!

Though ‘it’s no good’ is a contender for me too!

There’s just so many to choose from for me. I don’t want to spoil things but there might be another DM track in this very list.

Can’t wait to find out which song you consider better than this, cause this one is as you say, a beast!

There were a few from this album that could’ve made this list. It’s easily my favourite DM album, so many great songs.

As you said, I recognize it from the very first notes and man..I LOVE IT. Certainly one of their greatest songs that doesn’t get old no matter how many times you’ve listened to it!

Totally agree. It’s completely timeless no matter how many repeat listens it’s given. I love it too.

[…] first series I started this blog with and this song certainly ends it with a bang. Back at number eleven, I proclaimed “Enjoy the silence” as one of Depeche Mode’s biggest hits. Well, at number one, […]

[…] one also hit these pages as part of my Best tunes of 1990 series. “Enjoy the silence” was number 11 on that list and only comes second here to an indisputable modern classic, but it too is definitely […]