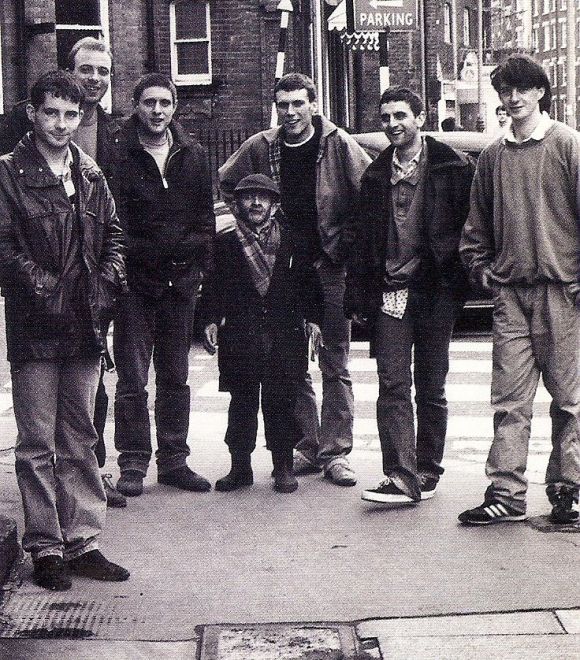 So as of yesterday at noon EST, I’m off from work for just over two weeks, a break I am really looking forward to enjoying. I am also planning to take a similar amount of time as vacation away from these pages. Before I do, though, I wanted to get one last post in to start up a brand new series and it had to be done today.

Back on August 27, 2012, ten years ago today, I started up a new series on my old blog, Music Insanity, that counted down my top 100 favourite tunes from the 1980s and I’ve decided to revisit and revise said list (hence, the “redux”), starting today. I‘ll leave the preamble at that for now. To read a bit more on the the background, check here.

Starting things off at track #100, The Happy Mondays, and one of their seminal tunes, “Wrote for luck” (aka “W.F.L.”), are a band that I attribute more to the early 1990s than I do the 80s but they actually dug their proverbial roots in the dying days of the “Me” decade.

The Happy Mondays were at the forefront of the vibrant “Madchester” music scene that synthesized psychedelic rock with acid house and rave culture. Their music was rough and tumble but danceable and the Mondays were known for Shaun Ryder’s edgy vocals and their full-time dancer, Bez’s funky moves. They (or a fictionalized version of them) were featured in Michael Winterbottom’s excellent 2002 film “24 hour party people” (the title of which was taken from another Mondays song), a chronicle of the rise of Manchester as told from the point of view of Factory records founder, Tony Wilson. There’s no telling if the real Happy Mondays were as drug-crazed or as fanatic as the band portrayed in the film but my best guess is that Shaun Ryder and his crew partied like rock stars, especially given the legend that their coke and spending habits bankrupted the aforementioned Factory records before their long-promised fourth record could be released.

“Wrote for luck” comes courtesy of the band’s second album, 1988’s “Bummed”, produced by famed madman/producer, Martin Hannett, whose studio trickery gave the album its heavy, heavy bass. And though I think I may prefer the percussion forward remix by Vince Clarke (yes, that Vince Clarke) that was rereleased as a single the following year*, the album version is just as funky and dance club ready. Whenever I hear the tune, I always think of the millions of times I would race out onto our university pub dance floor and find Acid Head Scott** already out their screaming along and doing his best frenetic Bez impressions.

Listening to the song on my ear phones this week, I got to wondering how it didn’t place higher on the list and almost considered rearranging on the fly. Unlike a number of the songs that we may soon find on this list, “Wrote for luck” doesn’t feel like it’s aged a day.

This one goes out to Acid Head Scott and the rest of you old Baggy kids out there.

Favourite lyric: “I wrote for luck, they sent me you /
I sent for juice, you give me poison” Tony Wilson once called Ryder the best poet since Yeats. I don’t know about that but it’s certainly a fun couplet to scream out on the dance floor.

Where are they now?: The Happy Mondays have gone through numerous breakups and reformations over the years. For their fourth kick at the can, the original and definite lineup reformed in 2012 with all kinds of lofty plans for their first new record in 20 years. Said record never materialized but they’ve toured regularly and did release one non-album single in 2015. Sadly, Paul Ryder, founding bassist and brother of frontman Shaun, died this past July.

*Mostly because I’d heard and loved this version first.

**Don’t ask me why we called him that. I have no SFW response.

And so starts Sean Ryder’s litany of nonsense that makes up the lyrics on “Step on”, the standout track from Happy Mondays’ third long player “Pills ‘n’ thrills and bellyaches”. To write this post a couple of weeks ago, I downed a couple pints of Beau’s Tom Green Summer Stout, put on my earphones, turned up the volume and then, put the yellow vinyl copy I bought on Record Store Day a few years back on my turntable. Lights dimmed and mood created, I dropped the needle, texted my friend Andrew Rodriguez the watermelon slice emoticon, and I let the party begin.

I really didn’t know what to think the first time I heard “Step on” and really, I understood less, the more I learned about the band. They were a product of their time and place: late 80s Manchester. There were drugs. And the mixing of 60s psychedelia and acid house culture. Lots of dancing. And more drugs. The beat was king and that was all the meaning that was necessary. “Pills ‘n’ thrills” illustrates this point, all groovy bass, bongos, drum machines and samples, chaotic, yet organic guitar craziness set against Dadaist lyrics and Ryder’s unsung, shout-along vocals. It is a non-stop party as long as you keep dancing and the drugs don’t run out.

The moment “Step on” came on, the third song on the second side of the album, I wanted to get up and dance around my living room. It is a rave epitomized. It’s whistles and heavy bass. It’s Shaun Ryder yelling “call the cops”. It’s Bez dancing with his maracas. It’s that hopping keys line and growling guitars. It’s neon and glow sticks. And to top it all off… it’s a cover song… or so I learned from an Andrew Rodriguez text message while writing these very words.

Yeah. Apparently, it’s a cover of song from 1971, originally by South African singer/songwriter John Kongos. Ryder and co., renamed it from the original title “He’s gonna step on you again”, and created a version that I can only imagine is completely different. And you know that there’s no way I want to go back and hear Kongos’ version now, after all these years. It can’t exist in this dance party world that I inhabit while the song plays in the background.

Such a great tune and as Rodriguez succinctly summed it all up: “By midway through the song you are too busy dancing to care what twisting my melon means”