So I was downstairs in the basement a few days ago, looking for something else entirely, when I came across a treasure trove of my old cassette tapes. Yes, you read that right: cassette tapes. And with that clarification, you may be asking yourself why I still have cassette tapes in my possession, especially when I no longer have the appropriate hardware on which to play them. Well… it would be the same reason why I still have piles of old concert tickets, old floppy discs, rough drafts of long forgotten and unfinished short stories, and other random bric-a-brac from my past, all cluttered together in the same roughneck storage bin. The memories attached to these things are priceless and irreplaceable and even though I only ever come across them once or twice a year (while looking for something else), I can’t bring myself to part with them.

It was while sorting through these cassettes, remembering when and for what reason I made each, and reading through the track listings, that I got the brilliant (well, you might not think so) idea to share one or two of these as part of my (Spotify) playlist series. I’m starting off with this one, “Raging retro”, because it’s one of only a handful of those in the box that I didn’t in fact make, but instead, was made for me. Susan, a scenester friend of mine in university (and who I haven’t spoken to in years), actually made a few mixed tapes for me, though this might be the only one that I still have.

As evidenced by the faded but still legible in some places playlist pictured below, the mix was conceived in October 1995. Susan wanted to share a taste of the songs that had been in constant rotation at an eighties night she started attending regularly the previous summer. I feel like this was one of the first times I ever heard the term “retro” being used in regards to music. I was dubious at first because the memories I had of the music from that era were not great but I ended up listening to the tape quite a bit.

Pretty soon, I was hearing the term “retro” everywhere, mostly in reference to music from the 1980s, and not necessarily the mainstream music to which I grew up listening . A couple of years later, I found myself going to a Toronto club named “Whiskey Saigon” pretty regularly on Sunday nights. Of course, that was the night the club had an eighties night that was so wildly popular that the radio station, Edge 102, broadcasted live to air every week and the club was constantly filled to capacity, on all three floors. Retro, for a time, almost became like a sub-genre of music all its own, which for some reason even appealed to young hipsters that were too young remember this music when it was originally released.

In 1997, the film “Grosse Point Blank” was released starring John Cusack (incidentally, another 80s icon making a comeback) with a soundtrack featuring a number of eighties songs, including ones by The Clash, The Beat, and The Specials (there were three other Specials songs in the movie that were not on the soundtrack). This movie and the ubiquitous presence on eighties night playlists is how songs like the Violent Femmes’ “Blister in the sun” resurfaced in the nineties, was infinitely more popular than when it was originally released in 1983 and is now considered a classic in popular music.

But I’ve gone off on a tangent, let’s get back to this mixed tape. For me, “Raging retro” was the springboard to regaining an appreciation of the 1980s. So many of those tunes on this tape became favourites of mine. And for those bands of which I wasn’t already a fan, it led me to delve deeper into their catalogues. Such is the magic of a well-executed mixed tape and the main reason why I’ve decided to share it with you all today. 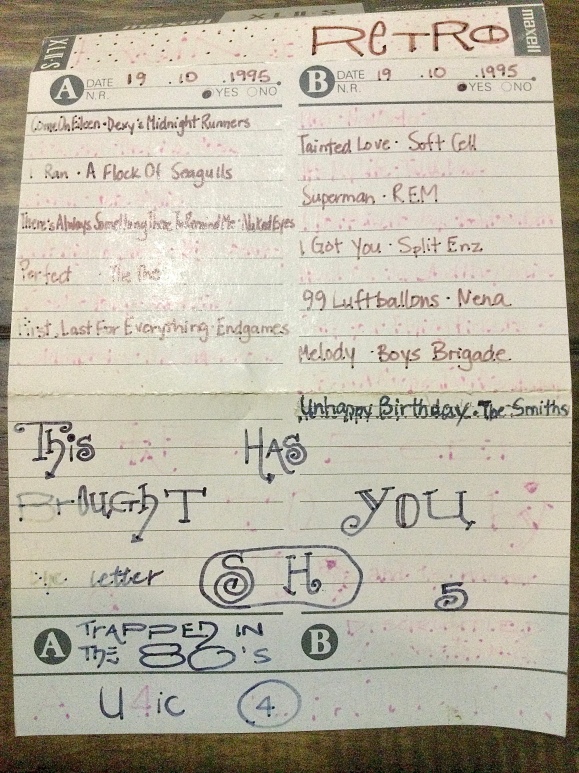 As I mentioned above, some of the tracks in the listing are no longer legible. Apparently, purple ink doesn’t have the staying power against the sun and the passage of time as has black ink. Nonetheless, I was able to piece it all together and laid it out for you below. At least three of the songs were apparently too obscure to be found on Spotify but I at least managed to find YouTube links for those of you who want to know what you are missing as you peruse this delicious Spotify mix.

But before I get right into the playlist itself, here are some highlights that you definitely should check out and incidentally, half of those are ones that Spotify hasn’t made available:

For those who don’t use Spotify or if the embedded playlist further below doesn’t work for you, here is the entire playlist as it appeared on the original mixed (complete with side titles):

Side one “Trapped in the 80s”:
1. Dexy’s Midnight Runners “Come on Eileen”
2. The Icycle Works “Birds fly (Whisper to a scream)”
3. A Flock of Seagulls “I ran”
4. Pete Wylie “Sinful” (unavailable on Spotify)
5. Naked Eyes “Always something there to remind me”
6. Big Country “In a big country”
7. The The “Perfect”
8. Alphaville “Forever young”
9. Endgames “First, last for everything” (unavailable on Spotify)
10. Chameleons UK “Swamp thing”

And here is the promised embedded Spotify playlist for your listening pleasure. Get out your Vuarnet sunglasses and neon spandex and enjoy.

If you’re interested in checking out any of the other playlists I’ve created and shared on these pages, you can peruse them here.