London-based quintet, Suede, has made a number of appearances on this blog’s pages already. I’ve already written about how I picked up on them late but once I finally did, it was true love. I’ve touched on how phenomenal their b-sides were in their early days, tackled one of their covers, and even spoken of their untimely disbanding in the early part of the 2000s. But what I haven’t really gotten to thus far is their post-reunion material.

Seven years after their breakup in 2003, the lineup, as it was upon dissolution, re-formed for what was being called a one-off set as part of the Teenage Cancer Trust shows at Royal Albert Hall. Frontman Brett Anderson had such a blast that more shows followed… and then more… and then tours followed by festival circuits. Their first reunion album, “Bloodsports”, appeared in 2013 and picked right up where they should have left off ten years earlier. Two more albums were released in 2016 and 2018, orchestral and dramatic and notable for lacking what one might call ‘radio-friendly singles’.

All of those last three albums have been enjoyed by this particular fan and have also been critically lauded all around. I think with “Autofiction”, though, their 9th studio album and 4th since reforming, Brett Anderson and crew have created their best piece of work since their biggest album, 1996’s “Coming up”. This new one was originally meant to be recorded live, in front of rabid audiences, to capture their own particular live performance energy. Of course, these plans were scuttled due to the pandemic and they chose instead to keep production light, recording with additional musicians, rather than additional layers. Anderson has called this the band’s ‘punk album’ and it certainly has more energy and less bells and whistles.

“Autofiction” sounds like a Suede album from yesteryear but with the maturity and experience of today. It is dramatic and dirty and romantic. It is eleven fantastic tracks that bare their soul to the listener more and more with each listen. It is a complete album and it should be listened to as such, but if you’re lacking the time, you can start with these three tracks that I’ve picked out for you.

“What am I without you”: The finale track on the album is the six minute exercise in introspection and self-appraisal. Anderson is recognizing his lot as an entertainer and the rest of the band backs him up with their guns a-blazing. To the question he asks himself over and over – “What am I without you?” – you can almost see him shrinking under the heat of the spotlight. The answer can only be: “I’m nothing without you, so let love burn.”

We’ll be back in a couple days with album #4. In the meantime, here are the previous albums in this list: 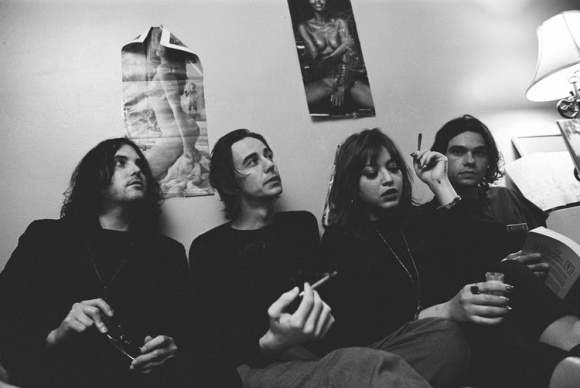 Back on Cinco de Mayo, 2015, I went to see Swervedriver perform at the now defunct Zaphod Beeblebrox in Ottawa’s Byward Market. I had been excited to see yet another re-formed shoegaze legend, but as much as I enjoyed their set, I found myself quite surprised to leave the show even more impressed by the opening act.

Los Angeles-based four-piece, Gateway Drugs, had only just released their debut album, “Magick spells” the month before, and they had already toured as support for noise rock and shoegaze icons Ride and The Jesus and Mary Chain. They were led by a trio of siblings – Noa (guitars), Liv (guitars), and Gabriel (drums) Niles – each sharing vocal duties, while the fourth member, Blues Williams, simply looked cool and accompanied them on guitars and bass. The quartet were all in black, leather, furs, and sunglasses and were playing a garage rock infused shoegaze that sounded at different points like early Dum Dum Girls, Brian Jonestown Massacre, and Black Rebel Motorcycle Club. I left the show with a copy of the aforementioned debut album on CD and duly fell in love with it. Its accomplished sound and the pop sensibility that lies just beneath the surface of all those roaring and screeching guitars could easily be traced back to the music surging through the veins of the Niles siblings (children of The Knack’s Prescott Niles).

I was convinced they were going to be huge.

But then, there was nothing but relative silence from the group for almost five years.

Fast forward to 2020, just a few short days after the WHO declared COVID-19 to be an honest-to-goodness pandemic and things started to shut down in earnest, a new Gateway Drugs single appeared, seemingly plucked out of the ether and there finally came the news of the long-awaited sophomore release. I say this last bit with my tongue firmly planted in cheek because perhaps I was one out of only a small handful whose interest hadn’t waned in the interim. This first single really got me excited and that was only multiplied by fifty or so when I learned that “PSA” was produced by The Raveonettes’ Sune Rose Wagner.

“Put myself on a leash, I’d stay
Kill myself just to hear you call my name”

Of course, that first single was none other than “Wait (medication)”, our song of focus today. I’ve read that Liv Niles has called it a reflection on excess, madness, addiction, and how “extreme highs give way to extreme lows.” It’s an apt Coles Notes for the jackhammer drum beat, crunchy bass line, clanging and twangy guitar screams, and the dual vocal assault by Liv and her brother Noa. It is a four-minute salacious stroll down the chaotic and messy trail blazed by the JAMC and the BRMC.

I’ve already written bits about the Help Warchild album a couple of times for this series. Songs from this, my favourite ever compilation, have already appeared at number 100 and number 74 on this list and here we are again, this time with Suede’s cover of Elvis Costello’s “Shipbuilding”.

Of course, at the time, I had no idea this was a cover. Given how quickly the Help album was recorded and released*, the CD copy of the compilation that I purchased used from Penguin Music the year after its release had almost nothing in the way of liner and production notes. I was also still something of a newbie when it came to Suede. I had obviously heard of them, their eponymously titled glam rock debut, and had fallen hard for “My insatiable one” off the “So I married an axe murderer” soundtrack, as well as the “We are the pigs” single off their sophomore release “Dog man star”. Still, I was a few months shy of the full on love affair with their third record, “Coming up”.

I only discovered the original when I finally decided it was time to explore the work of Elvis Costello a decade or so later. It appeared on a Best Of compilation that I tracked down and recognized it immediately as track eight from Warchild. The music was originally written by Clive Langer for Robert Wyatt but unhappy with his own lyrics, he approached Costello to refine them. The song was a reaction to the Falklands war and played on the irony that shipbuilding towns would see a modicum of resurgence while its fighting age sons would be sent off to fight and perhaps die.

Costello’s original is a hip and jazzy number, emboldened by a trumpet solo by Chet Baker. The musicianship is tremendous and you can’t argue with those phenomenal lyrics** but there is something just a bit more suave and swank about Brett Anderson, no? In his and Suede’s hands, it’s a bit more of a rock ballad, heavy on the bass and the piano, and though the trumpet still appears, it’s more muted.

Yeah, I dig Elvis Costello. But I love Suede. I’m going with the cover here.

*All within eight days!!!