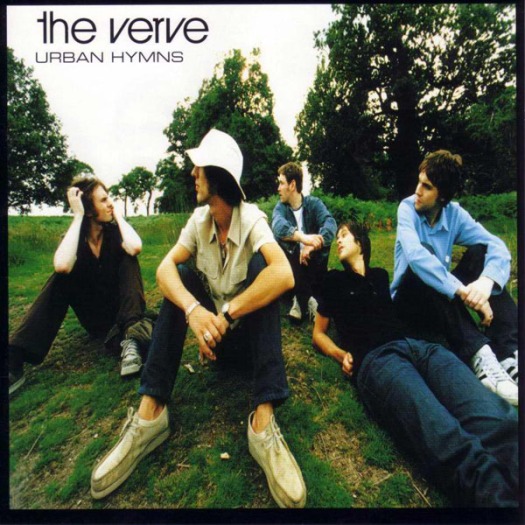 The Verve is one of the few bands that I truly regret not seeing live and I’m pretty sure my wife Victoria would join me in those sentiments. And this is how it played out.

If you’ve been following my list of my favourite tunes of 1991, you would know that one of my pastimes in the early nineties was recording alternative music videos to videocassette tapes off of MuchMusic’s “CityLimits”. I discovered a lot of music in this way, including The Verve’s early single, “Slide away”, except in the case of this song, I didn’t get around to exploring the rest of their material. I duly forgot about the band until the fall of 1997 when I first heard the single, “Bittersweet symphony” while dancing at York University’s largest pub and its infamous alternative pub night, “Timebomb Thursdays”. Suddenly, the song was being playing on Edge 102 and every week at the aforementioned pub night. I distinctly remember standing in line for a Charlatans UK concert near the end of September with Victoria and being handed a leaflet for the new album by The Verve and Victoria asking me about it. By the time we were hooked on the album, their Remembrance Day show at the Phoenix in Toronto was long sold out and then, when they returned the following year, it was in Hamilton! We were pretty jazzed when we heard they were reforming in 2007 but the tour swing through Toronto came mid-week, which made the trip from Ottawa a bit difficult to maneuver. So unless we see a fourth reformation of the band, Victoria and I will have to be happy with the Richard Ashcroft solo slot we caught, opening for Coldplay, a great set that was nothing at all to complain about.

The songs written for “Urban hymns” were meant to be for frontman, Richard Ashcroft’s debut solo album, after the band had dissolved following their second album. During the sessions, he began working with the various members of his old band and realized that he would need Nick McCabe’s guitars to truly realize his vision for the sound of the album. So The Verve was reformed and we are all truly thankful.

According to my wife Victoria, there are very few albums that she can listen to from beginning to end and not only not want to skip a track, but actually love pretty much the whole thing. “Urban hymns” is, for her, one of those albums and on that, we are agreed. I think we may even have the same favourite songs (but perhaps she might have subbed in “Sonnet” for “Lucky man” in the three songs below). It is a long album that doesn’t feel very long. One song leads quite logically and emotionally into the next. It is a big album with enormous sound, each song epic in scope and passion. It is real and honest but because McCabe was involved, holding Ashcroft back a bit, it doesn’t teeter into sappy and navel-gazing territory. It is a guitar rock album that lives in its own universe, nothing else can touch it, the sound is atmospheric and full and layered like a Russian doll.

Is it better than Radiohead’s “OK computer”? I am sure that is debatable either way. I personally think so but admittedly, it may be be nudged slightly ahead due to all the memories I have invested in it. But hey, have a listen to my three picks for you below and let me know your thoughts.

“The drugs don’t work”: “All this talk of getting old. It’s getting me down my love. Like a cat in a bag, waiting to drown, this time I’m comin’ down.” Such a beautiful song. Acoustic guitars and gentle string arrangements that build to a bombastic, full band accompaniment to Ashcroft’s ruminations on his life and his drug addiction. This track always reminds me of the earliest days of my relationship with my wife. But before you get any ideas, it’s not because either of us were heroin addicts. “Urban hymns” was released at the tail end of our first year ‘together’. Victoria and I both fell in love with the album and listened to it incessantly when we convened to my bedroom to get away from my roommates. The lyrics of the song spoke to us, especially those about being “better off dead” if “you leave my life” and singing “in your ear again”. So yeah, this song reminds me of being young and in love and singing softly to the lyrics in that tiny bedroom, lit only by a candle.

“Lucky man”: “Happiness, more or less. It’s just a change in me, something in my liberty.” This track is probably one of the most uplifting on the album but as evinced in the preceding quote, even that is tempered. The lyrics suggest contentment of a sort and with the benefit of hindsight, we know that there is a hint at Ashcroft’s battles with depression and also, that he was newly in the throes of early love. When Victoria and I saw him perform solo a number of years ago, Ashcroft performed this track and his preamble was a dedication to his wife Kate Radley, who he said, made him feel like the luckiest man every day. But even before I knew any of this or did any of my own deconstruction, this was one of my favourite tracks from the start. There’s plenty of whirling guitars and effects, layered over the simple guitar strum and drum beat, then the strings come in and the heavens open up for us to witness all the glory possible. It is utter brilliance and beauty.

“Bittersweet symphony”: “Cause it’s a bittersweet symphony this life. Trying to make ends meet, you’re a slave to the money then you die.” Yeah, this song. If you don’t know any other track on “Urban hymns”, you definitely know this one. Much has been made about how popular his track is and how it didn’t make the band any money due to the legal question of its use of the string sample. There have also been words written to the effect that this is the song that broke up the band but the band had always been in trouble. No, this song just adds a bit of tragedy to the story because of how brilliant it is. And yes, I can use the word ‘beautiful’ to describe this song too (for those counting, I’ve mentioned the word for each of these songs). It stomps and dances and flits and flirts. As Victoria is always telling me, you want to close your eyes and go to that place: the music is the place. You want to march straight down the road without stopping or changing course, like Ashcroft does in the video, ignoring all around you but the song. I don’t care how many times I’ve heard it, “Bittersweet symphony” is new every time, like true love, and it just has to be one of the best songs ever written and recorded.

Check back next Thursday for album #1. In the meantime, here are the previous albums in this list:

Random phone photo number twenty-eight: half price sale? #covıd19 #newnormal #gasprices #gobsmacked #halfpricegas
Re-watching game 2 of the 2019 Raptors NBA playoff run. This is where it truly began. Go Raps! #raptors #raptors2019champs #rapsvsmagicgame2 #nbashutdown2020
Things are getting a wee heavy out there so I thought I’d lighten things up with a Wee Heavy chez moi. This delicious beer by Bicycle Craft (@bicyclecraftbrewery) has been a favourite of mine for a few years now so I always try to get out to the brewery to pick some up when it’s in season. Cheers all! #craftbeer #craftbeerjunkie #localbrewery #buylocal #613beer #ottawacraftbeer #ontariocraftbeer #weeheavy #strongbeer #bicyclecraftbrewery #beeroclock🍻 #tgif #cheers
I love it when there’s a history lesson on my can of beer. Here’s Kichesippi Brewing’s (@kichesippibeer) St. Patrick’s day special dry Irish stout, named in honour of the Irish immigrants who helped build Ottawa’s famed Rideau canal. Happy St. Patrick’s day! #craftbeer #craftbeerlover #craftbeerporn #localbrewery #buylocal #613beer #ottawacraftbeer #ontariocraftbeer #dryirishstout #stpatricksday #kichesippibeer #historylesson #ottawahistory #rideaucanal #corktownstout #corktownfootbridge #beeroclock🍻 #cheers