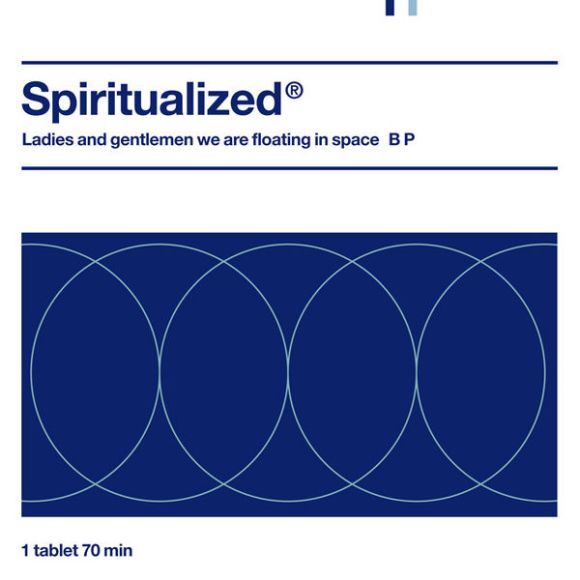 Remember when I said a couple of weeks ago that there was another good reason I saw Radiohead live (and that I would get to that later)? Well, this band and this album is that other reason. I had seen Spiritualized perform at a small club a few months earlier on the same tour for this album and when I heard they were opening for Radiohead, I was sold.

In my opinion, “Ladies and gentlemen we are floating in space” is one of the greatest breakup albums of all time. And though Pierce denies it, saying that most of the record was written before his breakup with Kate Radley, it has since come out that she had secretly married Richard Ashcroft in 1995. Yeah. So if you haven’t put two and two together yet, two of the best albums of 1997 (obviously, my two favourites) were directly or indirectly inspired by one woman: Kate Radley. I’ll just leave that there.

This album was lauded at the time and continues to be appreciated today. Much has been written, especially last year when celebrating its 20th anniversary, about how it is considered frontman and driving force, Jason Pierce’s masterpiece. Even he must’ve known it at the time. It was recorded relatively quickly but the production took several months, as if he knew he had to get it just right. The album is almost a symphony in its scope. The four main band members at the time (still including Kate Radley) were joined by contributions from string quartets, horn sections, gospel choirs, and even virtuoso session pianist, Dr. John. It has been performed live in full a number of times over the years, where Pierce manages to amass a massive cast of musicians on stage to recreate the album’s gigantic sound. Otherwise, plenty of electronic trickery is required.

But beneath all the madness and sounds on the album is Jason Pierce and his struggles. The emotion and insanity he imbues into the music reflects his perceived state of mind. He mixes metaphors and imagery, juggling drug addiction, religion, love, and love lost. A friend of mine from university once said to me that whenever she saw him perform live, or even just listened to this album, she just wanted to give Pierce a big hug and not let go. Indeed, for all the boldness of his compositions, he sounds so fragile when singing, like a strong gust of wind might take him down at a moment’s notice.

Yeah, so what is “Ladies and gentlemen, we are floating in space”? It is space rock, shoegaze, ambient, psychedelic rock, free jazz, and gospel, all packaged together in one album. It may sound scattered on paper but it works. And I’ll tell you, the two times I saw the band perform live on tour for this album, they were truly religious type experiences.

It just so happens that my three picks for you are the first three tracks on the album, but that doesn’t mean the rest of the album pales. Far from it. But these are as good a starting point as any. Enjoy.

“Come together”: It’s a droning beast. Heavy handed bass is relentless and the drums crash. Then come the wailing guitars and the crushing and ominous organs, flashes of horns, and a gospel choir somehow makes a jubilant appearance. Yes. All this happens in one song. It’s a chaotic cacophony but as ringmaster and orchestrator, Jason Pierce keeps it all together. It’s a perfect sample of this album, the structure, the sanity just seemingly on the verge of crumbling away. It’s a great tune for earphones because if you turned it up as loudly as you wanted without them, the neighbours would be complaining. Or not. I wouldn’t, if I was that neighbour.

“Ladies and gentlemen we are floating in space”:  The title track opens the album with the aforementioned Kate Radley saying the album’s title on the phone, presumably on an answering machine. There was a lot of conjecture and rumour about whether or not this was a real message left for Pierce but I think that would have been too much really. The song itself is a beauty. Lush strings play with Quindar tones while Pierce sings different lines and melodies in round. It sounds space age and classical (specifically, Pachelbel’s Canon) at the same time. Original versions had Pierce merging in parts of Elvis Presley’s “I can’t help falling in love with you” but they were taken out at the behest of Presley’s estate, though he usually adds them back in when performed live. Either way, it doesn’t get much more heart rending than this.

“I think I’m in love”: I don’t know how true it is but I’ve heard the only reason Jason Pierce let The Chemical Brothers remix this track was to somehow prove to them that the perfectly timed drum beat that wends through the song’s back end was recorded live, not by a machine. And while it is remarkable, that rhythm is only one piece of this fantastic masterpiece. Its eight minutes is divided in two parts or movements. The first is blissed out psychedelia: bass, washes, harmonicas, all floating in the ether with Pierce’s drugged up vocals. After about three minutes of this, the drums kick in and everything comes alive. Pierce’s vocals become a call and response, by turns, optimistic and cynical. “I think I can fly. Probably just falling.” So awesome. So sad. So brilliant.

17 replies on “Best albums of 1997: #1 Spiritualized “Ladies and gentlemen we are floating in space””

Hard to disagree with this one taking the #1 spot, JP. Phenomenal album… exceptional… sublime… spiritual. I got into this a few years later (around the time of Let It Come Down). Got into it in a big way, actually… but it’s better late than never, eh? Psychedelic cosmic gospel …

Good track choices, too. I Think I’m In Love is my pick of them… I like how it chimes.

I also really like Broken heart. Great arrangements there

Yes! Incredible tune… they all are, I guess. Not a dud on there.

Looks like Radiohead needed to get inspired by Kate Radley to make it higher than #3.

Haha. Wouldn’t that have been something.

Yes. It should be on the top. Ear phones and a glass of red wine are a must.

[…] of “Ladies and gentlemen we are floating in space”. (You might remember that this was my number one album in my best albums of 1997 list.) The trio quickly formed a new band and got right to work writing […]

I need to spend more time with this – somehow in my head I’d written them off as an electronic band and left them alone. The tracks I heard here are more, obvs, so I’ve been unfair. THe title track sounds to me like they’re playfully, skillyfully building off a bit of Phantom Of The Opera!

Sorry, not the title track, Come Together, I meant…

[…] a pretty big Spiritualized fan, my favourite of their albums still being 1997’s “Ladies and gentlemen we are floating in space“. So I was pretty eager to get to listen to this latest, the eighth for the outfit, ever […]

[…] “Ladies and gentlemen we are floating in space”, which some of you may remember hit the number one spot in my best albums list for that year back in May. That album is still considered the group’s high […]

[…] two albums that followed Spiritualized’s “Ladies and gentlemen we are floating in space” were slight (and slighter) disappointments around these parts but there were likely doomed, […]

[…] It wasn’t until 1997 that I really ‘discovered’ both of these bands. Spiritualized’s “Ladies and gentlemen, we are floating in space” was my favourite album that year (“Urban hymns” was very, very close second) and it only […]

[…] of how great it was, how it was a return to the sound and scope of their masterpiece, 1997’s “Ladies and gentlemen, we are floating in space”, and how it might very well be his last album. I was so excited I jumped on it right away, […]