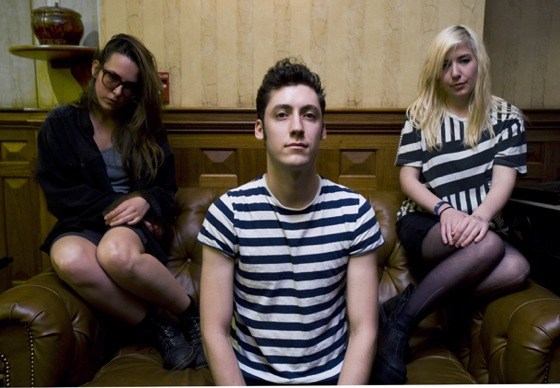 Have you ever listened to and enjoyed an album up to a point but then, after seeing the band perform its songs live, it’s suddenly your favourite (at that moment) album? Well, it’s happened to me… a number of times. And one of these was with Austra’s debut album, “Feel it break”, after seeing their incendiary performance at Ritual Nightclub on December 3rd, 2011.

If you’ve not heard of them before, Austra is a three-piece band from Toronto, Canada, whose moniker was taken from the middle name of the petite lead singer and front woman, Katie Stelmanis. The other two members of the band are drummer Maya Postepski (also of TR/ST) and Dorian Wolf on bass. When I saw them live, they were joined onstage by a keyboard player and the Lightman twins (from Tasseomancy) singing backup. However and with apologies to her bandmates, this project is really about Stelmanis, a classically trained singer who found a love for electronic music, which explains the seemingly boundless vocal range.

While listening, if you can tear yourself away from just the vocals for a moment and realize there is backing music, you might hear a strong resemblance to the sounds Depeche Mode was making during their darker periods in the late 80s and early 90s (see albums “Music for the masses” and “Violator”). And it’s not just her use of synthesizers that make me say this but also her use of the minor key. Kate Stelmanis has admitted a love for writing music in minor keys, which is something of which Depeche Mode’s principal songwriter, Martin Gore, was also fond.

“Lose it” is easily my favourite track of many fantastic songs on “Feel it break” and most probably the catchiest of the lot. Starting off with a cool robotic sound that mixes European industrial with that aforementioned early Depeche Mode, the song jumps up a notch when Katie Austra Stelmanis adds her lush vocals and you’re just thinking how amazing she is and then she blows that away again with the chorus.

So if you’re up for some new-wave inspired electronic tunes, I highly recommend giving “Lose it” a listen. It’s especially excellent for enjoying through earphones.

Haven’t heard this one before (or heard of it), but it’s pretty catchy (and cold).

And yeah, I’ve got a few albums I love because I saw the artists play live (I often think that’s why I have a real fondness of The Black Crowes’ By Your Side when most around me think it’s all a bit mnah – I also really like Pete Yorn’s debut for the same reasons).

Nice. There’s just something about a band’s live energy that doesn’t always translate to their recordings but listening to it after the live show, you remember it.