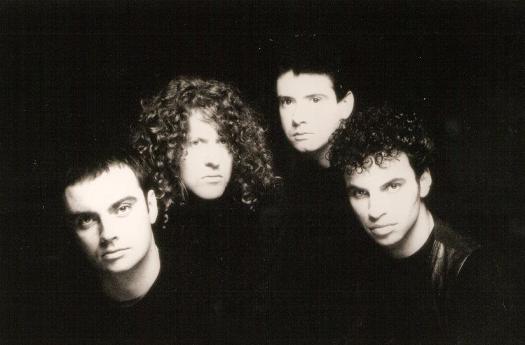 It’s kind of funny now seeing the term bandied about and used (and perhaps misused) to describe a lot of today’s bands and indeed, a lot bands describing themselves using the word and carrying the banner for ‘shoegaze’. Especially since, back in the day when it was coined, it was used with such derision and the bands affiliated with the sound did their best to distance themselves from it.

Catherine Wheel was one of these bands that hated the term. And yet their debut album, “Ferment”, was a textbook case in the sound – the effects pedals, the hazy and droning guitars, the uncertain vocals buried deep in the mix – and the advance single, the seven plus minute, “Black metallic”, has been called by many to be the “Like a hurricane” or “Stairway to Heaven” of the genre.

Catherine Wheel was formed in 1990 by guitarist Brian Futter, bassist Dave Hawes, drummer Neil Sims, and frontman Rob Dickinson*. They released a couple of shoegaze-informed EPs before signing to Fontana Records and re-recorded a bunch of tracks from those EPs to form the basis of “Ferment”. However, if you listen to the other four of their albums after the debut, you can hear Catherine Wheel slowly but surely beating the shoegaze out of their music. With each successive album, the alternative rock got a bit harder and more pedestrian and my own interest in them ebbed and flowed as they toyed with their sound. They did quite well in North America, though, a success outside of their native England that not many of the original shoegazers were able to achieve.

And it all started with this one, “Black metallic”, after its music video got picked up and was thrown into heavy rotation on MTV. The video was filmed using the 7” version and at just over four minutes, much shorter than the 12” version and the one that appears on “Ferment”. I prefer the longer version and I can’t imagine I’m alone with this opinion. It can almost be called a ballad and is definitely a love song. Or a falling-out-of-love song. The swoon-inducing line that is repeated throughout, comparing his lover’s skin to that of a car, could actually be Dickinson’s way of painting the love as gone cold.

The reverb drenched guitar intro is quickly joined by a lazy beat and the chiming, swirling guitars. It all blends together like a dry ice fog, even in the quieter moments, where Dickinson’s vocals should be clear as day, they are still somehow obscured, the white noise, a figure in the room, a fifth player, a silent observer. These, of course, have their counterpoint and in the messy guitar rave outs and they are given plenty of room to breathe. The length of the song expands and exhales and yet still somehow doesn’t feel self-indulgent in the least. It’s beautiful and sleek, like the line of a fine muscle car and just as dangerous, when all revved up. Why don’t you take it out for a drive right now?