It is indicative of its time and place that by the time this, the group’s debut, self-titled album was released, two years later, many of its songs were already known or at least familiar to the indie music community. The internet and blogosphere was in full hype machine mode and Vampire Weekend were definite beneficiaries. The debut hit and climbed both the UK album charts and Billboard 200 upon its release. It was met with critical acclaim from most corners but of course, with quick success came backlash, some detractors screaming about theft of world musician thunder by privileged white kids. Interesting, then, and the band did lash back with explanations, that all four members graduated college with student loan debt and that their collective lineages were varied and multicultural.

When I first got a hold of this album, I did so with some excitement. There was so much fun and energy in the songs. The album sounded very DIY, almost like a mixed CD-R, which was likely a result of the self-production and the range of recording locations, including a family member’s basement. And the sound, which many attributed to thievery of afrobeat sounds and compared to Paul Simon’s “Graceland”, I thought more hinted at the world outside of North America rather than outright plagiarism and with its mixture with punk and post-punk sensibilities, was reminded more of music by The Police than Mr. Simon. The lyrics’ subject matter were varied and quirky, name-checking other musicians, grammatical usage, and architectural details, and the music was intelligent, unique, and also just this side of Wes Anderson-ville.

Of course, two albums later (and soon to be a third) and “Vampire Weekend” is considered a classic album by an indie rock world mainstay. It ranked high on many best album lists of its year and decade lists by many music mags, blogs, and websites. And well, looking back, I still love it and can sing along to most of its tracks. Have a sample of my three picks for you and if you haven’t checked out the album as a whole, I highly recommend it.

“M79”: This is one of the first tracks on the album that really caught my attention. And how could it not, really? Bursting forth with harpsichords and orchestral strings, it hops and pogos along with a ska-like rhythm and pace, complete with staccato guitar riffs. But what does it mean? A bit of research confirmed that the M79 is a crosstown bus in New York. So, much like their other tunes, the metaphoric-sounding lyrics by Koenig make a lot more sense to New York habitants and insiders. Words like “No excuse to be so callous. Dress yourself in bleeding madras. Charm your way across the Khyber pass.” are really about dealing with relationships across class and cultural lines in the big apple.

“Oxford comma”:  If the last track was one of the first songs of the album to catch my ear, then this was most definitely the first. Released as the third single off the album, track two sounds so simple, driven forward by the plunk, plunk of organ chords and the sparse rhythm that sounds like it was banged out just using the one drum. Even the guitar that peaks it’s head out of the melody for a solo midway through the song feels free and easy and uncomplicated. And that opening line: “Who gives a fuck about an Oxford comma?” If designed to catch attention, it certainly does the trick (especially to a grammar geek like me). Vampire Weekend rarely use profanity in their songs so its appearance here says something about the the song’s protagonist’s attitude towards his antagonists’s apparent haughtiness. And yeah, it’s all so damned catchy.

“A-punk”: Talk about energy. Track three is it. Living up to its name, “A-punk” certainly calls to mind the sniper attack of two minutes or less punk, though this tune clocks in just over that time. It’s got skank and slam dance beats, staccato rhythm guitars, and some surprising flute-aping synths give the song some levity. Koenig throws a lot of lyrics at us in such a short span of time, the subject of which are cause for debate. References could be to bands of influence, historical context, more NYC time and place. However, what’s not up for debate, given the “ay, ay, ay” instead of “oi, oi, oi”, is the sensibility. This is a song for dancing to, for letting loose and forgetting it all, a song for Saturday night, a song for partying. Ay, ay, ay! 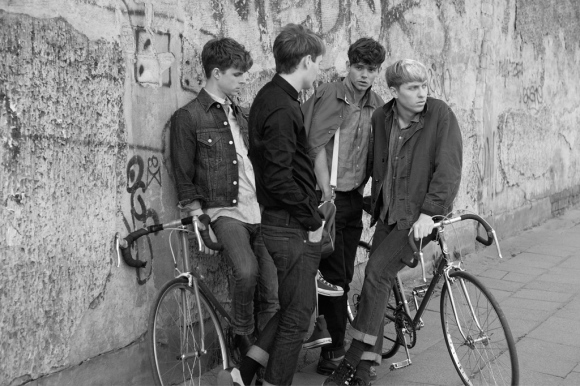 The Drums are an indie pop band out of New York City that were formed by childhood friends Jonathan Pierce and Jacob Graham. In 2008, Pierce relocated to where Graham was living in Florida to start collaborating on material and they later moved to Brooklyn where they fleshed out the band to a four-piece with Connor Hanwick (drums) and Adam Kessler (guitar). They were tapped as the next big thing by everyone from Pitchfork to the NME, even before they released their debut, self-titled LP (on which this song appears) in 2010. They have since released two more albums but internal friction and disagreements have meant that the band gradually lost members along the way. These days The Drums consists only of Jonathan Pierce and he has album number four coming out on Friday.

“Best friend” will always remind me of a trip my wife and I took out to British Columbia in 2011, over a full year after this single’s release. We spent three days in Vancouver before visiting Victoria and Whistler, and all of this during the Canucks’ crazy run at the Stanley Cup that year. (As you recall, they didn’t win and there were riots.) On our final full day in Vancouver, we were visiting the shops in Kitsilano after eating a fine vegetarian lunch at The Naam and happened into Zulu Records.

My wife always urges me into record shops in cities that we’re visiting and feigns interest herself while I take my time browsing. This was almost a full year before I started collecting vinyl but that was the section I found myself gravitating towards anyway. At some point, I recognized the song playing in the store but couldn’t place it right away. It sounded retro but I knew it was new and hip and at that moment, was really digging it. I even caught my wife subconsciously swaying to it at the other end of the store. But the band’s name was escaping me. It finally came to me well after we had left Zulu Records and we had made our way to Kitsilano beach.

Was it the beach that reminded me that the song we had heard was “Best friend” by The Drums? Perhaps. The song certainly is summery and bright, and calls to mind friendships of days gone by, that could very well have found their roots in the loose and warm grains of a sandy beach. It is jangle and reverb and peppy drumming, the sun glinting off the rim of a pair of sunglasses worn by a beautiful girl. Perhaps your teenage crush, perhaps the girl that never noticed your affections but instead, she dated the most popular guy in high school and considered you her best friend. Cheers to that!