Yep, it’s that time of year again. The best of the year lists are going to start pouring in from all over. It was actually around this time last year that I kicked off my Best Albums series with an end of the year list for 2017. I then travelled back in time through the decades, with stops at 2007, 1997, and finally, 1987 (you can find all of these completed lists here). It was a fun exercise and I’ll endeavour to do the same over the next year, starting with this 2018 list.

The drill is this. You’ll get albums ten through six, a sort of honourable mentions collection, today, and then, I’ll run through my top five albums of the year over the next five Fridays. If all goes well, the number one album will be revealed on the final Friday of the year.

For 2018, you’ll likely find that my list won’t resemble many of the lists from the real music sites. In fact, if you’re hoping for spoilers in the photo at the top of this post, you’ll be disappointed. None of those albums will appear in this series. As I get older, I find my tastes don’t line up as often with what is hip and new. I did check out a few of the buzz bands and some of them were quite good (hello, Shame and Starcrawler), just not top ten good in my opinion. And well, the ten albums that will make up this list may not be everyone else’s best. But they’re mine.

As always, I welcome hearing your own favourites and thoughts on my choices in the comments section of each post. 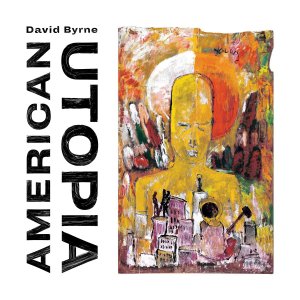 To be honest, the only reason this album made this list at all is because I got to see the former Talking Heads frontman this fall at Ottawa’s CityFolk festival. I had only given “American utopia” a cursory glance prior to the festival and wasn’t even sure I would stay for his whole set because of a scheduling conflict with another artist but I was glad, in the end, that I did. His was probably one of my favourite sets in recent years and I’ve been listening to this album regularly ever since, it growing in my esteem with each play. Yes, it’s varied in sound but not in theme. For his first solo album in fourteen years, Byrne is as fresh and quirky and intelligent as he ever has been.

As some of you may undoubtedly already know, I’ve been a pretty big James fan for a couple of decades now but the appearance of their fifteenth (!!!) studio album here has nothing to do with loyalty. In fact, I wasn’t much of a fan of their last album, 2016’s “Girl at the end of the world”, as a whole, disagreeing with a bunch of people who made it the band’s highest charting album to date. “Living in extraordinary times” is at times as big as the best of James’s hit singles but it also has its quiet moments. At its core, though, it’s an album that has Tim Booth and band trying to find a forward in these crazy times, with more than a few nods and kicks at the current US president.

Okay. So I had never heard of this band before this year. I don’t even remember how I originally came across their sixth studio album, “Shadow people”, but i know it hooked me from the beginning. It took some doing to figure out what they were about, including reading a Wikipedia entry written in French. My French is improving but far from perfect. Still, I was able to ascertain that they are a duo, Lionel and Marie, indeed from France, that were performing in other groups for many years, before forming The Liminanas in 2009. This latest album checked a lot of my boxes with its droning and driving psychedelia and then mixing it with laid back and cool Serge Gainsbourg sounds. That it includes contributions by Anton Newcombe and Peter Hook is just topping on the cake. I can’t wait to dig into their earlier work.

For a band that hasn’t worked together in over a decade and an album whose players reside in three different states, The Essex Green and their fourth studio album, “Hardly electronic”, sound pretty slick indeed. I got into this group after seeing them open for Camera Obscura in 2007 and bought their album “Cannibal sea” based on their performance. I have now been salivating while listening to that album and waiting over eleven years for new material. Now that’s in my hands and spinning on my turntable, I am not disappointed in the least. They picked up the 60s and 70s inspired indie pop right where they left it and they quite possibly might have improved on their sound in the intervening years. Hopefully, it’s not another decade before we get album number five.

#6 Colter Wall “Songs of the plains”

Who is this Colter Wall? He definitely does not sound of this time and place, singing somber and slow-burning numbers about the plight of the plainsmen in the 1800s and the legend of Wild Bill Hickok. Amazing, then, that this kid is but 23 and hails from Saskatchewan, Canada. It was my brother Mike that alerted me to him when he saw his name on the lineup for Ottawa’s CityFolk festival. His was definitely one of the highlight sets of the festival for me. Not only are his songs well written and of a different sensibility in today’s pop world but Wall has a voice that has been compared to the likes of Johnny Cash, though I for one would say it is even more profound than that. This is his sophomore album and builds upon the fantastic work laid out on last year’s fine debut. I think we’ll be hearing lots from him in the coming years.

Check back next Friday for album #5 on this list. In the meantime, you can check out my Best Albums page here if you’re interested in my other favourite albums lists.