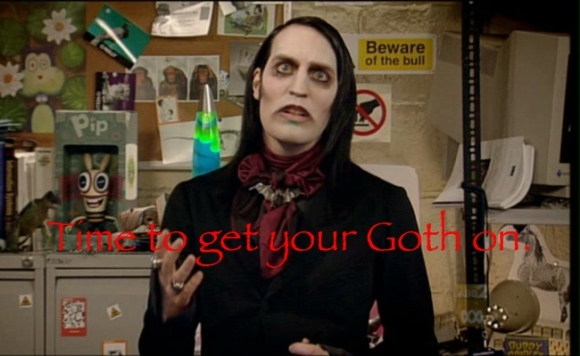 Er… To be honest, it’s not a holiday I observe but it did give me occasion to start in on an idea that I’ve kicked around in the past. And that is making and sharing genre-themed playlists on these pages. So, yeah, starting things off with Goth.

Goth is easily the music genre, lifestyle, and subculture that is most misunderstood by mass media and the public in general. I remember the going joke amongst a few of my coworkers, some years ago, which centred around the term ‘practicing Goth’ (as in, ‘Look at all that black, it looks like Jennifer is practicing Goth today’). It’s a term we culled from an article, one of many that had wrongfully attributed the perpetrators of the Columbine massacre as members of the ‘Goth community’.

I’m not sure I even fully understand the idea of being and ‘practicing’ Goth and all of the different offshoots that now exist but I do enjoy some facets of the fashion (the adoption of Victorian dress, for instance). I am also quite a big fan of a lot of the music that inspired the original scene, though I completely missed out on it, being too young at the time.

Some people sneer at the term Goth as a genre of music, calling it gimmicky, and the truth of the matter is that many of the original artists attached to the genre disliked the tag and tried to loosen its hold. I can remember going to a Sisters of Mercy show in Toronto in 1998, seeing all the youngsters in the audience wearing black, leather, S&M gear, etc., and wondering what they thought of lead singer Andrew Eldritch coming out on stage with his hair bleached blonde and cut short, and wearing a loud red Hawaiian shirt.

The idea in creating this playlist was not to define what is and what is not goth but to celebrate those artists that inspired generations to wear black. It is somewhat chronological, starting with those post-punk artists that toiled in darkness (Joy Division, Bauhaus), continuing with those that took up the mantle (The Cure, The Sisters of Mercy), squeezing in some acts that are not technically goth but definitely don’t sound out of place (Nick Cave, Leonard Cohen), and finally, gently transitioning to those that felt honoured to play in the originators’ shadows (She Wants Revenge, The Horrors), many years later.

For those who don’t use Spotify or if the embedded playlist below doesn’t work for you, here is the entire playlist:

For those of you who are on Spotify, feel free to look me up. My user name is “jprobichaud911”. 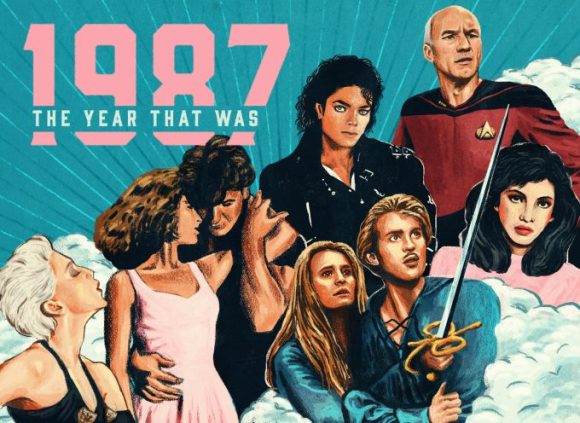 Happy Thursday! And welcome to the third installment of my Throwback Thursday (#tbt) best albums of the year series. This time, we are on a voyage all the way back to 1987. Just over thirty years ago. The world was a different place, especially for me. Because I was but a child.

1987 marked the year I left grade school and entered high school. A big step for some but since my school was in the process of spawning a secondary school, it just meant changing classrooms. I don’t remember much else special about those early days of grade nine, at least nothing else I want to share today. It was… a very, very long time ago.

Nonetheless, I can assure you that, at the time, I didn’t know anything about music. I definitely wasn’t listening to the albums that will make up this top ten list. In fact, I can’t even remember for certain the songs and artists to which I might have been listening. It was likely the pop and top 40 that I was able to pick up on my AM radio, music from singers like Bruce Springsteen and Corey Hart and Madonna. I would only start discovering the world of alternative music a few years later and some of the following albums would figure in, while others I wouldn’t discover until much later.

It will go without saying that a good portion of the albums I will cover today and in the coming weeks are now considered classics and very much in the mainstream but back in the day, they were on the cutting edge and pushing the boundaries of what pop and rock music should be. So before I start ruining surprises, I am going to kick things off with the first five albums of my top ten below. And if you don’t know the trick by now, I will be featuring the top five, an album each Thursday, over the next five weeks. I hope you enjoy this trip back 30 odd years with me.

#10 Dead Can Dance “Within the realm of the dying sun” 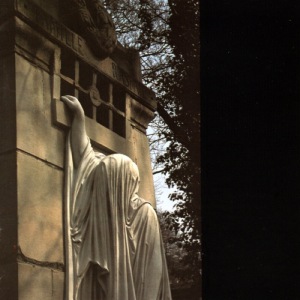 “Within the realm of the dying sun” is the third album by these Australian exports to England, mainly the duo of Brendan Perry and Lisa Gerrard by 1987. It marks a departure from their earlier post-punk and gothic rock sound, dispensing almost completely with guitars and utilizing a vast range of unorthodox instruments, some of which you may have never heard of or seen before. The album’s sides are split between the two primary vocalists and songwriters but it is cohesive in its big and dark and worldly sound. This is the Dead Can Dance we know and love.

With this, their second album, Jason Pierce’s pre-Spiritualized band with Pete “Sonic Boom” Kember, Spacemen 3 were arguably at their recorded output apex. They were given pretty much free reign of a recording studio for eight months, where they were able to experiment and hone their songs together to perfection. Compare that with the debut that was recorded in a week with an unsympathetic producer and to their third and fourth records, where the relationship, both personal and working, between the primary songwriters, Pierce and Kember, were by times, deteriorating and completely non-existent. This “rollercoaster” concept album of a trip (see what I did there?) is raw and soulful and psychedelic and woefully underrated.

#8 The Jesus And Mary Chain “Darklands” 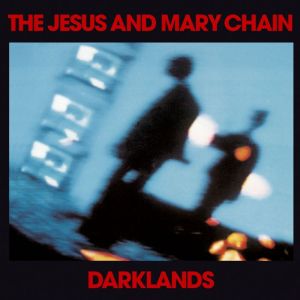 For their second album, the Reid brothers replaced Bobby Gillespie (who left to focus on Primal Scream) with a drum machine and really, did much of the instrument work on “Darklands” themselves. They stripped back a lot of the feedback and fuzz and noise but still managed to infuse the follow up to “Psychocandy” with just as much darkness and pure cool. Like the other two albums I’ve already listed, I got into this album years after its release and for me, it’s not an album of singles (although “Happy when it rains” is pretty phenomenal) but one of mood and feel. All black leather and sunglasses cool.

Gateway tune: “Happy when it rains” 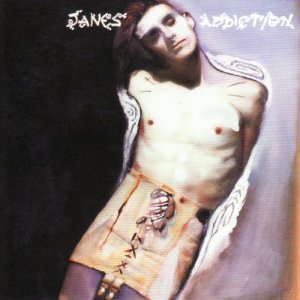 In doing these best albums lists, I’ve been trying to limit my selections strictly to studio albums, which is why you won’t find New Order’s iconic compilation album, “Substance”, in this list for 1987. However, Jane’s Addiction’s self-titled debut album is a special case. Yes, it is a live album but it was heavily mixed and dubbed in the studio afterwards. I also think that Perry Farrell and company went this route to avoid having their debut release come out on a major label, given that they were being heavily courted by Warner at the time. And finally, it’s an album that defies ignoring. It captures the band’s raw live energy and includes rough first recordings of songs like “Pigs in zen” and “Jane says” that would later get a makeover and become classics. And oh yeah, there’s a couple of great covers… like the one below.

#6 The Sisters Of Mercy “Floodland” 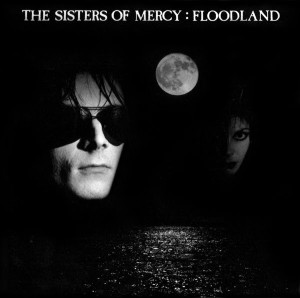 My friend Tim got me into The Sisters of Mercy back in the latter days of high school. He recorded me a copy of 1990’s “Vision thing”, which I loved, and later, when I caught and recorded the video for “This corrosion” on Much, the deal was sealed. The Sisters released three albums and each were recorded by three very different looking bands, the only constants were frontman Andrew Eldritch and his drum machine, Doktor Avalanche. On this, their second album, the goth rock outfit also included Patricia Morrison, who didn’t do very much on the album musically but definitely added to its image and tone. Epic rock producer Jim Steinman (who worked a lot with Meatloaf) also added his touches, especially on the aforementioned “This corrosion” and “Dominion/Mother Russia”. It’s big and it’s dark and it’s awesome.

Check back next Thursday for album #5 on this list. In the meantime, you can check out my Best Albums page here if you’re interested in my other favourite albums lists.

*Note: The photo under the title is not my own but I was unable to find the original source. Apologies and kudos to its creator.